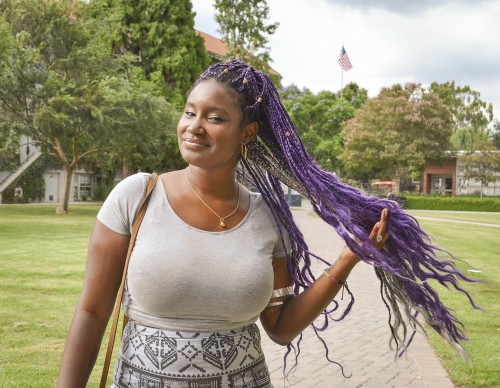 Senior English major Remy Easterling’s favorite color is purple. Although her decision to style her hair was impulsive, it took her mother two days to complete the hairstyle. Easterling is considering naturally-colored dreadlocks for her next style. / photo by Karla Rendon

“The first step is to put gloves on,” senior biology major Youngblood said. “Then I put coconut oil around my hairline, and then I put my hair into sections and put dye on where it needs touch-ups.”

Purple dye ran down her neck, but Youngblood did not mind.

“I have purple all over my neck, but that’s life,” she said.

Youngblood does not have an attachment to her hair, she said. For this reason she has had it cut short, long, bleached and dyed pink, blue and now purple.

Throughout 2015 more and more people have experimented with coloring their hair, from celebrities like Kelly Ripa and Kylie Jenner to La Verne students like Youngblood.

This funky hair color trend has taken over campus, especially with the freshman class.

As a freshman in high school, Smith dip dyed her hair in Kool-Aid.

“When I dyed it lavender, I wouldn’t wash it but it would still fade in the sun,” Smith said.

Smith attended a Christian high school that restricted creativity with appearance, so she could not express herself with her hair she said. Once she graduated from high school, Smith dyed it more permanently.

Remy Easterling, senior English major, attended a Catholic high school that was also strict with students’ appearance. She currently has her hair in braids woven with purple and gray color.

“I love the color purple,” Easterling said. “It matches the weather, so why not?”

Easterling previously had green and gray woven into her braids, but purple has been her favorite color so far.

Because Easterling will graduate soon, she started thinking about changing her look from funky to professional.

She plans to change her hair to a more “serious color” once she begins to interview for jobs.

“If you’re good at what you do, (your hair color) shouldn’t play a huge part in your career,” Easterling said.

Youngblood also knows she will have to change her appearance after graduation in order to land a more professional job.

“It’s upsetting that the color of your hair determines whether or not you’re professional,” Youngblood said.

Some people fear they could not pull off a funky color, like freshman math major, Alexa Jones.

“I wouldn’t have funky hair colors because my personality is more straightforward, especially for my future career,” Jones said.

Jones used to dye her hair burgundy, but because she was a diver in high school, it began to turn orange from the chlorine.

For this reason she hesitates to color her hair again, especially since it is now healthier, Jones said.

As Youngblood’s “purple haze” finally set in the following day, she gave advice to any-one who wants to make a statement with their appearance.

“Every time I get a compliment on my hair, it always goes like, ‘Oh my gosh I love your hair, but I could never pull it off,’” Youngblood said. “I look at them and I say, ‘Yeah you can!’ I felt the same thing beforehand. I was really nervous, but once you look at yourself in the mirror for the first time with that fresh hair color, you know it’s you and you’re going to feel that color.”