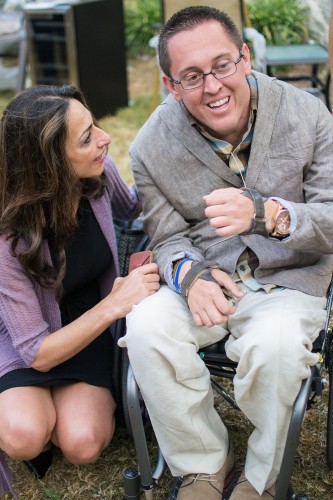 Better Life Mobility representative Lena Abusham thanks senior Hal Hargrave for his efforts at the sixth annual Be Perfect fund raising event Saturday. Be Perfect founder Hargrave brought together friends and foundaton members to raise money for spinal cord injury victims who cannot afford ongoing physical therapy. Hargrave started the foundation in 2007 when his friend was not able to continue receiving rehab for his injury. This year’s event raised more than $300,000 and the organization has raised more than $2.8 million since 2008. / photo by Sonora Hernandez

Tears of laughter, joy and hope filled the eyes of friends and family of those affected by spinal cord injuries at the Hafif Estate, site of the Be Perfect Foundation’s sixth annual fundraiser.

“Hal told his dad one day he wanted to start the foundation after another patient and friend (couldn’t afford to) continue therapy,” Hargrave’s mother Lorie Hargrave said.

“He told his dad that we had to help him in some way, so he could get therapy and that’s why we’re here today.”

In 2007, Hargrave, now 25, suffered from a break of his cervical fifth and sixth vertebrae affecting function from his triceps down after the truck he was driving rolled off the freeway and the driver’s cabin was crushed.

Doctors told family members Hargrave would be paralyzed from the neck down, with a 3 percent chance of ever walking or shrugging his shoulders again.

More than 1,000 friends and family members gathered Saturday in support of the foundation.

Entertainers Tom Cerafice and Doug Brooks hosted the event, which began with cocktail hour when guests bid on items such as an autographed guitar by Toby Keith, and autographed mementos from the Los Angeles Dodgers.

The Be Perfect Foundation sponsors those who cannot afford to pay for Project Walk, an organization that helps to rehabilitate spinal cord injury victims.

“Project Walk has helped my husband so much in therapy,” said DeAnn Campbell, the wife of spinal cord injury victim Steve Campbell. “I’m glad that our support group told us about Be Perfect.”

Steve Campbell, who also suffered a cervical 5-6 spinal injury and benefits from Be Perfect while working with Project Walk, said therapy has helped him so he is able to move his shoulders, arms and wrists.

Since starting therapy Campbell has gone from a motorized wheelchair to a manual wheelchair.

Be Perfect has covered the cost of his six hours of therapy a week for the past three years.

“I was shot 10 times in the back outside of a club in Houston in May 2011,” said Damien Maya, Be Perfect scholarship recipient.

“I’m living as an example of what hard and honest work will do for you.”

Maya has been involved with Project Walk for more than nine months.

Sponsored by Be Perfect, he went from no movement in the legs to improved muscle tone and movement in his legs.

He is hopeful that he will walk again with a walker or crutches.

To “Be Perfect” means to stand in the midst of who you are, speaker Chris Simning said.

He suffers from torsional distortion, which is the twisting of the torso. He could not move his body, and as it progressed, the disease affected his speech and mobility.

“It’s not about walking,” Hargrave said. “It’s about becoming independent. The real hero’s journey to me is the journey from strength to weakness, not weakness to strength. I’m set free because I have the greatest fear behind me: failure.”

Russell R. Silva can be reached at russell.silva@laverne.edu.