By Karla Rendon, Sonora Hernandez on December 5, 2014 in News 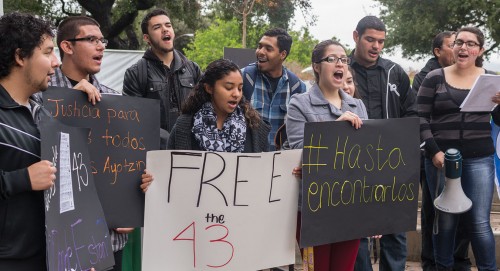 Nearly 60 supporters rallied at noon Wednesday in Sneaky Park to raise awareness and offer solidarity for the 43 college students from Mexico who went missing recently.

In plans of protesting an event held by Iguala Mayor Jose Luis Abarca’s wife, Maria de los Angeles Pineda Villa, 43 students from a local teachers college in the state of Guerrero went missing after being arrested by Mexican authority figures.

By order of Abarca, the police then turned the students over to a local drug gang, where many have still not been retrieved as of Sept. 26.

“I was angry about how the Mexican government was handling the situation and also because of the fact that many people were not aware of this that this is happening,” said junior criminology major Abril Camarena, who organized the event.

“Even today many people do not know this is happening so that’s why I felt it was necessary to organize this in order to make people aware of what’s going on,” Camarena said.

Forty-three chairs were set on the grass holding photographs of the missing students as supporters chanted, “What do we want? Justice. When do we want it? Now,” in both Spanish and English.

Students held signs reading “Free the 43” and “#Hasta Encontrarlos,” which translates to “until they are found.”

“I have a couple of family members in Mexico and they always tell me about kidnappings but this one took it to a whole other level,” junior chemistry major David Garibay said.

“It just shows you how life is over there in Mexico, which is crazy because we’re neighbors,” he said.

After a speech from Pitzer College professor Jose Calde­ron, supporters formed a circle with arms linked to as they sang “De Colores,” a traditional Spanish folk song commonly sung at rallies.

Camarena feels it is the obligation of people to stand up for each other.

“I don’t want to make this just a Mexican problem, this is a humanitarian problem that we should all come together and support one another,” she said.

“Events like this need to not only be relevant to how many ever students were here but they need to be relevant to our whole society, so we need to educate people on that,” Mendez said.

“What I would like for everyone is to keep at least students in their prayers or I their thoughts, especially for the family members,” Camarena said.

“These are college students just like us and this is something we need to support each other about,” she said.