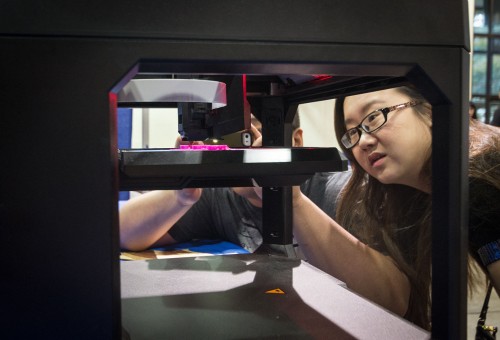 People gathered around the Plexiglas enclosed Robot Throwdown arena and cheered as Society of Physics Students from Mt. San Antonio College battled their homemade robots against one another Saturday at the first annual SoCal Maker Convention.

J6 Events, based in Ontario, planned and hosted the convention at the Fairplex, which featured innovative vendors, 3D printing demonstrations, drone demonstrations and robot battles.

“We wanted to try something different,” said Rick Huerta, creative director for J6 Events. “Anything or company with an out of the box idea was welcome to have a booth.”

Huerta got the idea for the convention after he attended the Maker’s Faire in Los Angeles. He said he wanted to host a convention that was more accessible and would spark interests in innovation.

“The goal of this convention is to have fun and make people realize that it’s OK to ask questions,” Huerta said.

The Robot Throwdown arena was the most popular attraction. Spectators consistently flocked to the arena, and their cheers and chants echoed throughout the convention center as the robots battled.

Vendors and innovators sold their creations at Start Up Alley. Most of the vendors were selling 3D printers, but others were marketing smaller inventions.

One company created a video book, which featured a video page that would playback home videos as the print on the page was read. Another company sold high definition sunglasses with a built in video camera.

“I think innovators need a home where they can show their stuff. There’s not a lot of places to show it, so it’s good to have one put together.” Huerta said.

Drone Zone held drone demonstrations and explained how drones could eventually contribute to the film industry.

“The current issue with drones right now is that the bigger ones violate FAA flight regulations,” said Adam Gibson, chief executive officer of CTRL.ME Robotics. “Our goal is to work with the FAA and continue to work on our drones in hopes that they can legally be used to film movies.”

“People don’t know how to fix simplistic things because schools don’t teach hands-on skills anymore,” said Neeley Fluke, marketing director of Vocademy. “That’s where we come in. If you want to make a prototype or just want to learn a trade, we can teach you.”

Huerta said the convention was so successful that J6 plans on making it an annual event.

“Next year we plan on having a bigger building and more people. Everything about it will be much bigger and we hope to keep expanding,” Huerta said.