Anna Westin Prevention, Training and Education Act to be introduced to Congress May 13

Anna Westin was 20 years old when the relapse of her anorexia nervosa began. She arrived home to Chaska, Minnesota, between her sophomore and junior years at the University of Oregon in 1999 and became much sicker than she was when her struggle began at age 16.

“She fit the profile for someone with an eating disorder,” Kitty Westin, Anna’s mother, said. “She was very bright, very high achieving, very motivated, worked really hard, had high expectations for herself and also on top of those other kinds of characteristics she suffered from some depression and anxiety.”

As Anna battled anorexia, her family experienced a battle of their own with the insurance company. Her parents returned Anna to the same care facility where she received outpatient services during her high school years to seek treatment in her young adult relapse.

“They wanted to admit her inpatient immediately,” Westin said. “The doctor said she was in critical condition and needed to be inpatient, and if we took her home, she could die. The insurance company said ‘Well, take her home, and we’ll get back to you.’”

This began a six-month battle with the insurance company to get Anna the treatment she needed.

“It hit me like a brick. I was so stunned,” Westin said.

The Eating Disorders Coalition, a national advocacy group, will introduce the Anna Westin Prevention, Training and Education Act of 2015 to Congress on May 13 at its spring National Lobby Day. This would clarify the Mental Health Parity Law to help eating disorder patients get access to insurance coverage.

The insurance company denied Anna intensive services at the hospital. Despite her parents’ attempts to keep her in recovery, Anna would check herself out of the hospital.

“I don’t think the insurance company killed her, you know, anorexia killed her. But they contributed because they would not authorize the continual care at the level she needed it that could have restored her health,” Westin said.

By January 2000, Anna had become more withdrawn and she continued to be denied the intensive care she needed. Anna’s parents started looking into residential care to pay for out of pocket, but journal entries discovered later revealed that she had given up her will to live.

“No family should go through what we went through. It was so horrific to have a child die. It just causes such extreme physical and emotional pain, and my thought was something had to change,” Westin said.

Westin said she knew that Anna’s story could help someone else, which after 15 years has translated into the Anna Westin Act.

“There are three elements for the House version of the Anna Westin Education, Prevention and Training Act. There is training, treatment and truth in advertising,” Katrina Mason, policy director of the Eating Disorders Coalition, said.

The Act is a refocused version of the Federal Response to Eliminate Eating Disorders Act that was first introduced in 2010.

“It is almost hard to even describe how we feel about having that honor, to use her name in such a way that could literally save millions of people, and have an impact not only in the United States but across the globe,” said Westin, a board director for the Eating Disorders Coalition.

Westin said the Eating Disorders Coalition helped to pass the Mental Health Parity and Addiction Equity Act of 2008, but language that would specifically encompass eating disorders was removed.

“What we are really wanting to do is clarify that eating disorders fall under mental health services and it is not a new service, we are not changing Parity Law at all,” Westin said.

By clarifying the Parity Law, eating disorder patients like Anna would not be denied intensive treatments. The Anna Westin Act will also require more comprehensive training for all healthcare professionals to identify eating disorders.

“We hear constantly that medical students, nursing students, dietitians, people in the medical field get very little education on eating disorders while they are in school,” Westin said. “In fact they may only get a handful of hours in their entire medical training program, and we think that is inadequate.” 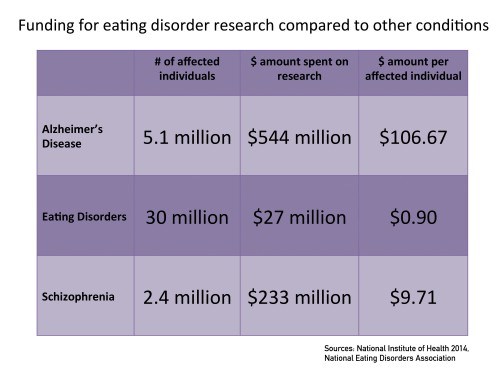 Nicole Kezos, a clinical trainee at the Counseling and Psychological Services at the University of La Verne, said that when she first encountered a client with an eating disorder, she was not sure what to do.

“I didn’t have a lot of experience with eating disorders,” she said. “I think they go unnoticed for so long; families don’t know about it. They hide it so well.”

Mason said the training section of the Act aims to inform school staff, medical professionals and the general public.

Eating disorders affect an estimated 20 million women and 10 million men in the United States, according to studies cited by the National Eating Disorders Association, yet research funding for eating disorders is as little as 90 cents per affected individual.

According to the National Institute of Health’s 2014 Estimates of Funding for Various Research, Condition and Disease Categories, eating disorders received about $27 million, while schizophrenia received $233 million and Alzheimer’s disease received $544 million.

One of the Eating Disorders Coalition’s stated goals is to make policymakers aware of health risks posed by eating disorders.

According to studies cited by the National Institute of Mental Health, anorexia nervosa has a mortality rate as high as 10 percent and a higher rate of suicide than people with other mental disorders.

Plus, suicides like Anna’s are one of the highest causes of death of people living with anorexia, according to a 2007 study published in the International Journal of Eating Disorders.

Other causes of death for people with anorexia include starvation, metabolic collapse and heart failure.

“It is important that (the Anna Westin Act) gets passed because out of all mental illnesses out there this is the one that has the highest mortality rate,” Mason said.

Recognizing the signs of an eating disorder from the beginning is the best way to ensure recovery, according to the National Eating Disorder Association.

Heather Russo, site director of the Renfrew Center, an outpatient eating disorder treatment center in Los Angeles, said that eating disorders could be caught early on by functions rather than physical changes to the body.

“Folks with eating disorders tend to be relatively high functioning, so we do tend to catch them later on,” Russo said. “A good thing for friends and family to be aware of is just noticing their loved ones’ behavior around food and events involving food.”

Other behaviors Russo said to look for are people pushing food around on their plate without actually eating, or frequently excusing themselves to use the restroom after meals.

Mason said the Anna Westin Act would also have school staff be trained to spot warning signs of eating disorders in students.

“The reason why we think it is important to train school staff is because they are the ones that are in the field who can more easily identify these early warning signs,” she said.

Cynthia Denne, the director of student health services at the University of La Verne, said children should receive information about nutrition and exercise early on in the K-12 years.

“That sets the pattern for lifelong choices and understanding of what being a healthy person is all about,” Denne said.

Denne said that at ULV, if a student frequently visits the health center and appears to have the signs of an eating disorder, the health center would do a health assessment to see if there is an underlying cause for weight gain or weight loss.

Then, she said, they would refer the patient to the Counseling and Psychological Services on campus.

The counseling program at the University of La Verne provides free services to students seeking help with mental health.

Kezos said that with each eating disorder patient she sees, she first gets background information and details about how much they are eating, binging, purging or exercising.

“It might just be that they unaware of (their behaviors), so (they) might be running seven miles twice a day,” Kezos said. “They might not think it is excessive, but (we) just kind of find out what they are doing that makes them lose weight.”

Russo said that treating eating disorders is a multi-pronged process including nutrition, therapy and possibly medication. She said that ensuring patients stabilize their meal intake and build a healthy relationship with a variety of foods is one of the key steps in the process. Medication, Russo said, is also used if any anxiety or mood disorders are concurrent with the eating disorder.

“There is difficulty when you’re in the grips of an eating disorder to understand what you’re doing with food is actually related to your emotions, because it can feel while you’re doing it like it’s about the food, or about your body or about the size of your stomach,” Russo said.

“Getting folks to understand what we do with eating disorder behaviors is really a function of how we are trying to deal with our emotions. Making that connection is really important.”

The National Eating Disorders Association cites that relapses like Anna’s are a natural part of the recovery process, but it is important to seek professional help immediately.

“This whole story is, ‘I wish I knew then what I know now,’” Westin said.

“One of the reasons I’ve done the work I’ve done for 15 years, and never stopped talking about eating disorders, and never stopped being an advocate for people that are still living with eating disorders, is that if I have wisdom, if I have information that can help prevent somebody else from experiencing what we did, and what Anna did, then I feel like it is my responsibility,” she said.

On the Eating Disorder Coalition’s National Lobby Day on Wednesday, more than 150 volunteers from across the nation will come together on Capitol Hill to introduce the Anna Westin Act and share their personal stories with members of Congress.

“There is a real person sitting in front of them saying, ‘This is my truth,’ and they kind of can’t ignore that,” Westin said. “We are not paid lobbyists. Nobody is giving me $100,000 to go out to Washington next week, and in fact I’m paying my own way and so is everyone else.”

Westin said this is around her 30th Lobby Day since the start of the Coalition and that it is an indescribable honor to be introducing an Act named after her daughter.

If people are not able to attend Lobby Day, both Westin and Mason said that they encourage people across the nation to call or write to local policy makers in support of the Anna Westin Prevention, Training and Education Act of 2015.

“It is really humbling for me and my family that they asked if they could use Anna’s name–it is an incredible legacy,” Westin said. “I have to pass that Act. If we can save one life, then it takes some of the pain away from having Anna die.”

Kellie Galentine can be reached at kellie.galentine@laverne.edu or on Twitter @kellie_gal.