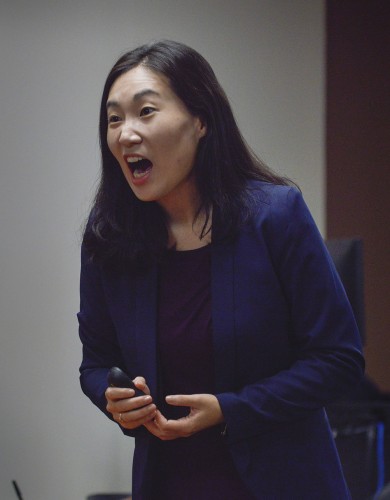 Responding to a question about the importance of using silence as a tool for success in negotiations, Assistant Professor of Management Yeri Cho presents a faculty lecture Tuesday in the President’s Dining Room. Cho explained her research process and how she gathered her data to come to the hypothesis that silence can be used as an advantage in any discussion. She said silence adds a sense of validity and value to a claim. As the next step in her studies, she will run more experiments to find the mechanism as to why this occurs. / photo by Noel Cabrera

Silence is golden for Assistant Professor of Manage­ment Yeri Cho, as she explained during her faculty lecture, “The Effects of Silence in Nego­tiation,” Tuesday in the President’s Dining Room.

Cho believes silence is a key negotiation technique, as it allows people more time to think, answer and recharge the mind.

“Silence is a part of communication, but we often do not think this way, so silence is kind of neglected,” Cho said.

Cho defined silence as “taking a pause before you speak.”

She wants students to be comfortable when using and experiencing silence in any kind of negotiations, especially when silence can often be a sign of rejection or punishment.

Cho conducted two studies to examine the effects of silence in negotiations and the results were interesting.

In her first study, Cho took 112 undergraduate students and formed 56 pairs. The pairs were randomly assigned to be either the recruiter (interviewer) or candidate (interviewee) and to be silent or non-silent.

Participants who were using the silence tactic were asked to stay silent for twenty seconds before speaking.

The study found that it takes 12 seconds of silence until a person feels discomfort and those who used silence had a better value claim, meaning the better end of the deal.

In the second study Cho had 186 participants from Amazon’s M-Turk and split them into same gender pairs. The participants took on different roles (silent, non-silent, and inter-turn, meaning they took turns using silence) in the experiment.

When the pairs used the inter-turn tactic, they reported a greater value claim and individual gain because they were allowed time to think about their responses.

Cho conducted the studies in China and the United States and was surprised that there was not a noticeable difference in the results.

Emily Jardel, senior theater major, was intrigued by the effects silence had on different genders and how the information is useful to her.

“I’m starting to go out into the real world and part of what I want to do is be a producer, so there’s going to be a lot of negotiation tactics used,” Jardel said.

Garrison Holder, junior music major, plans to use this information about silence in future negotiations.

“Using silence in negotiation actually has a tangible benefit and there is a tangible deficit when you don’t,” Holder said.

Cho is conducting a third experiment to study the mechanics of silence and is going to submit her research for publication in the Journal of Personality and Social Psychology.

Correction
In the story “Faculty lecture quiets the stigma on silence” (Oct. 23), silence was incorrectly defined. It is the lack of audible signals. Value claiming was mischaracterized. Value claiming is related to the increased possibility of receiving a better deal. Participants in the second study were described as taking on roles in pairs but were instead randomly assigned conditions and then watched videos and took the perspective of either actor-silence, partner silence and non-silence. Those using the actor-silence condition claimed more value. The Campus Times regrets the errors.