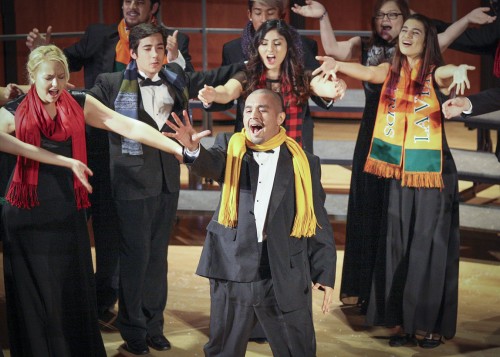 The concert opened with the University of La Verne Chamber Singers walking down the aisles in two groups and one group onstage, singing traditional carols like “Hark! The Herald Angels Sing” and “The First Noel.”

Once onstage, they sang “Together at Christmas,” which was a composition of classic Christmas songs like “Let it Snow” and “Have Yourself a Merry Little Christmas.”

Irene Messoloras, director of choral activities, conducted the holiday concert, which featured students from University of La Verne Chamber Singers and Chorale who sang in the program.

“We hope to remove you from the hustle and bustle of the holidays and calm and rejuvenate your spirit,” Messoloras said to the audience.

Before the concert began, ULV President Devorah Lieberman’s holiday greeting was played for the audience to watch, which featured the chamber singers.

The video was posted on the University’s Facebook page last week.

Freshman broadcast major and music minor Preston Parker had the first solo of the night.

“I love it, it’s such a rush,” said Parker. “Sometimes you get a little jittery, but you live in the moment and have fun with it.”

Parker also said that Messoloras has been amazing in teaching the craft and teaching them how to work their emotions into their performances. Parker has years of experience, as he started singing and performing in the fifth grade.

He trained in vocal jazz, chamber music and barbershop. He has also performed with singer Pharrell Williams at the Oscars and at the Fulfillment Fund Gala as part of promotional events for the film “Despicable Me 2.”

Santa Claus and one of his elves made an appearance. Santa went around handing out candy canes to everyone on the nice list this year.

“The presentation is very innovative, and the singing is beautiful,” said Susan Winckler, assistant director of the Mountainside Master Chorale.

Winckler and other colleagues from Mountainside attended the concert.

They next performed a new arrangement of “12 Days of Christmas.” The arrangement had bits of other songs like “Rudolph the Red-Nosed Reindeer” and “The Dreidel Song.” It also featured the melodies of “Carol of the Bells” and the song “Africa.”

“‘12 Days of Christmas’ was my favorite,” senior behavioral science major Alexceoanna Campo said. “It was creative and they pulled it off great.”

After a quick break, students from the chorale joined the rest onstage. The next solo came from Katie Ochoa, as she sang “Silent Night.” The chorale joined in by harmonizing with Ochoa. To include the different holidays celebrated during the season, they sang “Light the Legend” for Hanukkah and “Kuijchagulia” for Kwanza.

The concert came to an end with “Joy to the World.” Messoloras encouraged the audience to have compassion for one another during the holiday season. The choir received a standing ovation and went on to sing “Deck the Halls” with the audience.

“It made me feel happy, like I was at home with family,” Campo said.

Messoloras was accompanied by Rafael Liebich, who played piano during the concert. Cellist Ana Maria Maldonado was also featured during “Serenity.”