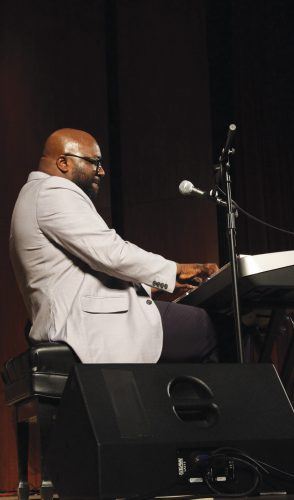 O’Neal, a Los Angeles Based musician and professor at Cal Baptist University, played passionately and deeply as he had personal attachments to each cover song he performed.

The set-list ranged from original compositions to covers he transformed into his own, such as Katy Perry’s “Firework.”

He opened the concert with Gloria Gaynor’s “Never Can Say Goodbye.”

O’Neal was accompanied by drums, an electric cello, electric guitar, a string bass, two electric violins, a viola, and a bass guitar.

To assist in vocals four additional singers were brought out for different songs.

The songs combined soul, jazz, and gospel – all full of positivity.

O’Neal was supported by family and friends in the audience.

He often paused to talk and laugh with everyone in the audience.

And he signaled a grand ending whenever he raised his left arm.

“He rearranged old and current songs making them new again, said Myracle Stevenson, who attended the concert. “I will be listening to him.”

“We need to invest in arts here in this community,”said O’Neal. “To support young people who are trying to create music, follow their passions and reimagine again.”

O’Neal and his friends performed with love and imagination making for an entertaining and engaging performance.

Sheridan Lee can be reached at sheridan.grenda@laverne.edu.