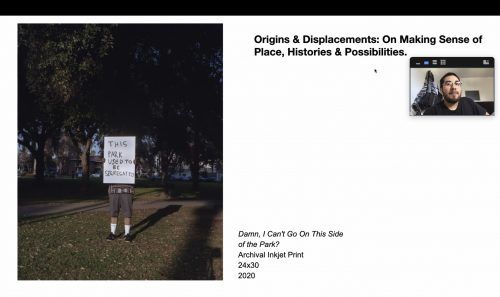 William Camargo, a photographer and arts educator, shows his photo “Damn, I Can’t Go On This Side of the Park” at the photography department’s artist talk via Zoom on May 14. Camargo uses his photography to bring attention to the injustice of impoverished communities. / screenshot by Sheridan Lee

William Camargo, photographer and arts educator, joined the University of La Verne’s photography department in a Zoom session May 14 to showcase his performative activism photography.

“There are different (things) I want to do with my art, maybe even make a change,” Camargo said. “It starts with a conversation….There are other things in my work: how can I challenge the Cannon (camera), challenge the notion that our bodies and spaces are beautiful and you can be part of that situation?”

In this online slideshow, Camargo presented his most recent work. After his return from Chicago to his hometown of Anaheim, where he is currently the commissioner of heritage and culture for the city, he noticed a change in the area, which led him to an interest in its history, which led him into a more historical practice.

His art is a mix of contemporary and Chicano art, as he described there are similarities between the two.

In a piece titled “Ya’ll Forgot Who Worked Here?” the photo shows the Anaheim packing house with a person holding up a sign saying, “Brown women used to pack oranges here.” The historical building, where farmers once dropped off their citrus to be prepared and packaged has been converted into a modern upscale food court.

Camargo said he is passionate about youth. Some of his work sheds light on the injustice of public schools in the impoverished Anaheim area.

Carmago said that one of the worst areas in Anaheim is the area surrounding Disneyland. He captures this in an image titled “About half a mile from Disneyland,” which portrays a group of hispanic boys and men sitting on a staircase, with the image really exposing the unknown.

“I’m not just going to make art and be satisfied with that,” Carmago said. “I want to influence with the art that I’m making.”

Since the pandemic, Camargo has had to adjust his practice. He has been using his resources and photographing his family in candid shots. He is also working toward an M.F.A. at Claremont Graduate University to continue his journey as an educator.

Hill closed the discussion with a quote to inspire the student audience during these challenging times: “Creating art is your escape.”