Amir Berbić, a graphic designer, embodied his family’s experience at a Denmark refugee camp during the Bosnian war through use of graphic design in the “Sahara: Acts of Memory” exhibition at the Pomona College Benton Museum of Art in Claremont.

During the war, over 2 million people were displaced. Four of those people were Amir, his father Ismet, mother Hika, and younger brother Isak.

Amir Berbić created this exhibit of memories and reimagination 28 years later to represent the years his family lived at the camp.

“Of course, war is traumatizing and being a refugee or leaving one’s home is traumatizing on many levels, but my memory of the experience in Sahara, the refugee camp, it’s not necessarily a sad one,” Amir Berbić said. “That experience was full of life, full of friendships that were formed during that time, full of resilience. So the posters reflect that.”

“If I was a writer I’d write about it but since I’m a designer, I designed about it,” Amir Berbić said at the exhibit opening on Nov. 11.

Ismet, also a graphic designer, originally branded the camp in 1993 shortly after their arrival. He named it Sahara and created a logo depicting a rising sun, which represents hope.

“My father’s designs for Sahara was about resisting such depictions, but a desire to be recognized by a name, recognized by an identity beyond that of being a refugee camp,” Amir Berbić said.

While at the camp, Amir’s parents struggled to find Bosnian language textbooks for the camp’s school. The few textbooks found had to be photocopied.

The exhibit features five redesigned textbook covers, each with a significant meaning. One has an image of a bicycle wheel.

“Bicycles were one of the first things we recognized about Denmark, so that’s one layer of meaning,” Amir Berbić said. “On the other hand, what is interesting with that textbook is there was a bicycle repair shop at the camp.”

Amir’s work includes vibrant color posters for activities that happened at the camp such as a disco night and an election.

“Overall…the color choice reflects the life that I remember during that time in the camp,” Amir Berbić said. “The project is about optimism.”

One of the gallery rooms is the same dimensions as the tents they lived in.

“We were trying to figure out how to give a sense of what that scale was like without having it be really didactic,” Karen Kice, Benton curator, said.

The museum diagrammed the tent’s furnishings on the floor of that room.

Isak Berbić was 11 years old when they lived at the camp.

“It’s an overwhelming experience. There are so many things that happened. An explosion of narratives it’s kind of hard to harness, to recapture,” Isak Berbić said. “One of the takeaways is that it’s really hard to capture these stories.”

“I’m really appreciative that we were able to actually hear from the artist about the experience, the inspiration and the process of bringing this exhibition to the Benton,” Ruth Metcalfe, freshman political science major at Pomona College, said.

Amir Berbić also considers the stories of recent refugees including through the new Sahara logo over a picture of modern-day Syrian refugees.

Salim Moore, Benton assistant curator of collections, said that the story of the exhibition was fascinating and that it reminded him of current events.

“The initial presentation was before President Biden announced the withdrawal from Afghanistan. So in the middle of this was a conversation about Afghan refugees coming to the U.S., so it got me thinking about his experience, connecting to contemporary events in the news,” Moore said.

The exhibit is open until Feb. 27, 2022. For more information visit pomona.edu/museum.

Darcelle Jones-Wesley, a senior photography major, is photography editor of the Campus Times. Her work can also be found at photographybydarcelle.com. 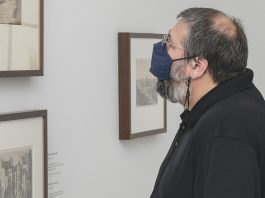