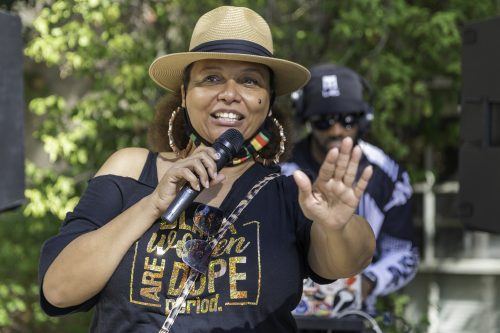 Misty Levingston, associate director of Multicultural Affairs and Black Student Services, welcomes people to the Welcome Black event Saturday in Fasnacht Court. The event, which was held to encourage a connection between the Black community and the University of La Verne, included music from Ronnie Gibson, known as DJ Ronnie G. / photo by Darcelle Jones-Wesley

The smell of delicious beans and and barbecue chicken wafted in the air, with the sounds of funk and soul music and dancing Saturday during the “Welcome Black” event Saturday afternoon in Fasnacht Court.

The event with about 50 participants was hosted by the Center for Multicultural Services.

“It’s important to bring us together so that we can physically see each other,” said Misty Levingston, associate director of multicultural affairs and Black student services, “We’re like 3%, I think. So everybody is kind of spaced out and a lot of Black students will be the only person that looks like them in the class.  So I think it’s very important … to show them that there are other Black folks on campus.”

Circular tables lined the perimeter of the court with representatives from across campus and various campus organizations.

There was also bingo and a raffle.

The event had music with outdoor speakers.

The DJ encouraged the crowd to dance on the makeshift dance floor in front of the fountain at the center of the Fasnacht Court.

“It’s really nice to see for them to have such a nice and well-prepared event where people could come out ,and it’s such a beautiful spot on campus as well,” said Aeysha Faruki, junior kinesiology major. “It’s just really nice to see them get recognized the way they deserve… and see people come together.”

In a sign that things are not yet quite back to normal, masks were encouraged for the outdoor event, and all participants were required to sign in on a clipboard to ensure that everybody could be accounted for possible contact tracing in case of a COVID case.

Still the  event had an air of comfort among the people present punctuated by lightness, laughter and easy conversation.

“It’s really hard to have conversations, obviously, in a virtual setting,” said librarian Karen Beavers, who attended the event. “I just think there is this feeling, that’s been kinda invoked like a family reunion here.”

Some La Verne alumni showed up, including Miesha Mcelrath, class of 2014. Mcelrath said that when she attended ULV as an undergraduate, there were fewer events like this one, and she would have liked to participate in more.

“I feel like I’m surrounded by family, you know, like I … never met these people but it feels like they are my people,” said Junius Anderson, senior sociology major. “This is the funnest event I’ve been to, because I’ve been to other events but this one kinda made it for me.”

Anderson, who is from the Bay Area, said he was used to being mostly around Black people, and so this event brought a sense of familiarity.

At one point when the crowd in the dance floor had diminished somewhat, Darvell Williams, an insurance vendor and Long Beach resident, strutted toward the center and dominated the dance floor with his moves.

The crowd cheered for him to continue and he did so for a few minutes until eventually his energy was drained and he decided to take a seat.

Williams showed off moves like the hammer dance and the running man, all innovative dance moves created by the Black community. With a nimble jump and kick he was able to clap underneath his leg, which was in mid-air for a split second.

All of this was done to Chic’s “Good Times,” the snare drum and clap part of the track, creating the perfect tempo for anyone to get up and dance.

The DJ picked up on the energy and soon got another crowd back on the dance floor in a matter of seconds with songs that people could line dance to together, like “Cha Cha Slide” and “The Cupid Shuffle.”

Anderson said that perhaps the next time they host this event, they could have an authentic barbecue with the grill and more games like dominoes, spades and other card games.

“I think it’ll improve the student body, so that more people know that they are welcome into these events like its not only about the Black community, it’s about getting everybody’s culture but also to help educate people,” said Jazzlyn Johnson, president of the Black student sorority, Sigma Gamma Rho, and senior biology major.

Johnson said that some people may not know of black sororities and fraternities or not know who the NAACP are and that these events help create a solution to that problem.