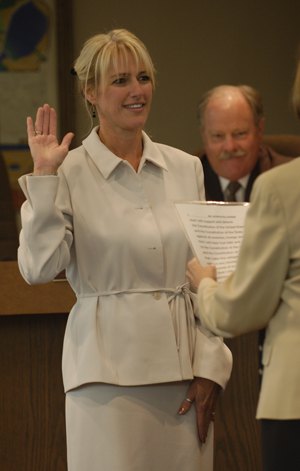 History was made Monday, when Donna Nasmyth was sworn in as the first female council member for the City of La Verne. Nasmyth, who has lived in La Verne all her life, received three degrees from the University of La Verne and works in the academic advising office. / photo by Leah Heagy

For the first time in La Verne’s 101-year history, a woman will serve on the city council. But councilwoman Donna Nasmyth said she would rather have citizens focus less on her gender and more on her qualifications for the job.

“Of course it’s an honor to be the first woman,” Nasmyth said. “But it was really the last reason why I decided to serve on the council.”

The 41-year-old – also a ULV employee and daughter of Education Professor Peggy Redman –  has lived in La Verne her entire life and has been devoted to serving the city through her volunteer time on various committees aiding the youth and senior communities.

“I think she’s a perfect appointment for many reasons,” Mayor Jon Blickenstaff said. “She’s bright, energetic, and she truly cares about the people of La Verne.”

Nasymth currently works as an academic adviser for online students and as an adjunct instructor of liberal studies.

She received her bachelor’s degree and her master’s degree from the University, where just last spring achieved her doctorate degree as well.

Nasymth was appointed to the council after Councilman Dan Harden announced his retirement on Aug. 30. She had been serving on the city planning commission and was nominated for the empty council seat by Councilman Don Kendrick and Blickenstaff.

The council then unanimously voted, 4-0, to have her installed, thus ending La Verne’s history of having an all-male council.

“It is surprising that with all of the capable women we’ve had serving the community, that it’s taken this long to appoint a woman,” Councilman Steven Johnson said. “It’s going to be great to have a woman’s insight.”

Nasymth was sworn in at the council’s Oct. 1 meeting. She will spend her first months learning the ropes of being a council member.

She has met with City Manager Martin Lomeil and has already begun meeting with other city department heads to familiarize herself with the rest of the community leaders.

Nasmyth will be serving along with other council members Robert Rodriguez, Johnson and Kendrick.

At this point, Nasymth said she has no specific legislation she wishes to pursue, other than to keep the rights of the youth and senior citizens protected.

She said she is concerned about potential conflicts of interest with ULV.

“I won’t be able to participate in any decisions regarding the University,” Naysmth said. “That will be hard for me.”

She will continue her duties at ULV, as the council position is a part-time commitment. Nasymth must work a minimum of two days a month and serve and participate on city committees.

She said she feels she will have enough time to devote to both the University and the city.

Nasymth’s roots in La Verne continue to grow — her eldest daughter, Summer, is a freshman at ULV and her daughter, Chloe, 7, is also going through the Bonita Unified School District.

Nasymth is eager to start her new position. She said the city has been especially accommodating and helpful to her as the newcomer.

“I’ve known her forever,” Johnson said. “She’s going to be a good addition to the council.”

Nasmyth will serve the rest of retired Councilman Harden’s term, which ends in March 2009.

Erin Konrad can be reached at ekonrad@ulv.edu.