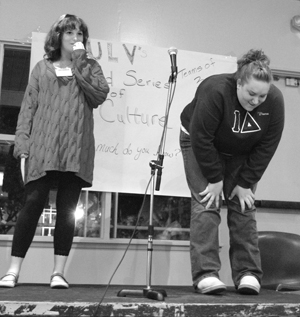 On Sept. 18, CAB hosted the “World Series of Pop Culture” in Davenport Dining Hall. Senior Diana Westmyer (right), from Team Delta Love, is digging for an answer while her opponent, sophomore Alexa Shugart, from Team P0wned, is standing behind her. Both Westmyer and Shugart are trying to come up with the correct answer to their question within five seconds. / photo by Wei Huang

More than 85 students gathered in Davenport Dining Hall for the “World Series of Pop Culture” event sponsored by the Campus Activities Board on Sept. 18.

The event, much like the television show on Vh1, was organized by Claire Boden­hoefer, the Games/Recreation and Spirit Chair for CAB.

She wanted to put on the event because of the television show’s popularity and how much people enjoy playing along.

The questions for the event came from several different sources.

“I got the questions for the contestants from various places. Some were from Trivial Pursuit games, some from the Scene-It games,” Bodenhoefer said. “I wanted to keep it to stuff that students our age could relate to.”

Ten teams, each consisting of three people, were asked questions about pop culture, ranging from popular movies to MTV.

The event was very much like the show. After each round one team was eliminated. If both teams had the same score, there was a tiebreaker question.

The tiebreakers were different for each round but the two contestants had to list as many things relating to a specific category as possible.

For example one of the tiebreaking tasks was to list names of characters from the show “Family Guy.”

Some of them included Team Awesome, Team Superbad, Team Does It Matter, Team Delta Love and Team Ramrod.

The names alone were enough to make the audience laugh.

One of Team Ramrod’s contestants explained where the name came from.

It was a fun experience for Rawson and his fraternity brother teammates Kevin Claeys and John LeJay.

His teammates were the reason he participated in the first place.

Rawson experienced some high and low points throughout the evening.

“The answers left my mind when I was up there,” Rawson said. “But I was happy when Team Ramrod won.”

The audience not only enjoyed watching but also knowing the answers to the questions even though they were not allowed to shout them out.

“I was having too much fun knowing everything before (the contestants) answered,” Adriana Serrano, junior behavioral sciences major, said. “It was awesome just getting to watch.”

Audience members were relieved when they were finally allowed to shout out the answers to questions they knew.

Everyone could feel the tension and suspense building up as contestants tried to come up with answers.

“It was really funny to watch everyone get frustrated at their friends,” Bodenhoefer said. “Everyone looked like they were enjoying it.”

“The event didn’t finish that night because we realized the event would have gone on for too long,” Bodenhoefer said.

“It actually worked out perfect because now we have a semi-finals game which will be more of a competitive atmosphere,” Bodenhoefer said.

It will continue with the five winning teams; Team Delta Love, Team Ramrod, Team Arman, Team Does It Matter and Team Winners returning to battle it out for the title.

“I feel really confident in us going to the next round,” Rawson said.

Diana Zarate can be reached at dzarate@ulv.edu.