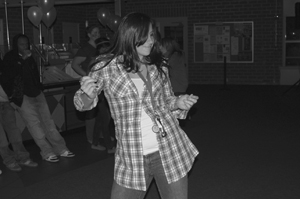 Students gathered in Davenport, on Nov. 27 for the final dance of the semester. It was a Western Dance hosted by the Campus Activities Board. Trisha McCormick, a junior enjoyed the beats of DJ Kamikazee, who drove down from Santa Clarita to mix the music. / photo by Jaclyn Dino

University of La Verne students came together for the final dance of the fall semester.

The Campus Activities Board hosted a Western Dance on Nov. 27 in Davenport Dining Hall.

Over 40 students attended the club-like atmosphere in Davenport for a western-themed dance.

Some students took the opportunity to dress up as Indians and others came dressed as cowboys.

The costumes ranged from boots, buckles and cowboy hats to feathers and face paint.

Students were encouraged to dress up according to the theme and some students decided to go ahead and roll with the idea and make it their own.

Although not a lot of students attended, those who did, enjoyed it.

Annie Parker, a junior psychology major, attended the dance that night to just have some fun and dress up.

“(Just) so I can dress up like an Indian,” Parker said explaining why she decided to go.

Parker did a good job with her outfit for the night, face paint and all.

Just a couple of weeks before finals, students are beginning to worry and stress so this dance was an opportunity for them to escape from the books and slip into some boots.

Like the other dances sponsored by CAB, they are always fun for students and a great distraction from schoolwork everyone has to deal with.

Despite the fun students had, they expected more people to be present at this dance.

Cristal Serrano, a junior liberal studies major, attended the event and had mixed feelings during the dance.

“It’s okay. There’s not a lot of people. It could have been better,” Serrano said.

Another student had similar thoughts about the Western Dance.

Hector Rodriguez, a sophomore business major, enjoyed the dance but thought that some things could have been done differently.

“It was a lot of fun,” Rodriguez said. “But just better promoting. I didn’t hear about it until today.”

The attendance was not exactly what most people would expect compared to the fact that previous dances have been more successful and dances on campus are usually more popular with the students.

Perhaps the crunch time of finals got to some students early this year.

Regardless of attendance, this last dance was a great way to end the fall semester.

Students did get something out of it: a fun time to let loose and dance.

“I got to hang out with my sisters,” Serrano said.

Make sure to be on the look out for more events that CAB will be having in the spring semester.

The activities will surely include more dances, comedians, contests, movies and speakers that will be just as fun, or even better than this semester’s events.

Diana Zarate can be reached at dzarate@ulv.edu.

Bowl For Breath
Blondes have all the fun