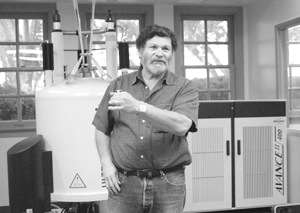 With the reagent in his hand, Frank Moralez, the Nuclear Magnetic Resonance Instrument Technician, explained the route of it, then put it into the machine. The machine allows students and faculty in the science departments to conduct research on campus rather than having to travel elsewhere. The NMR is located on the first floor of Founders Hall. / photo by Wei Huang

Students and faculty gathered in the Fasnacht Court for the reception for the installation of the newest scientific equipment at the University of La Verne on Nov. 1.

The instrument reads the structure of a substance and gives the information as a spectra on the spectrometer’s screen.

“The NMR is the most important instrument for teaching and research in chemistry and somewhat biology,” Iraj Parchamazad, professor of chemistry, said.

The NMR, installed a year and a half ago, will be used for the chemistry department in classes such as organic chemistry and analytical chemistry.

It can be used by other science departments as well, but it will be used primarily in chemistry courses.

“They get hands (on) experience with this instrument,” Parchamazad said.

Plans to buy a new spectrometer began 15 years ago.

The University follows the guidelines of the American Chemistry Society, which requires students to be exposed to an NMR.

The last NMR the department received was 10 years ago, but it is no longer sufficient, Parchamazad said.

“I can’t wait to get my hands on that instrument and push it to its limit,” Jay Jones, professor of biology and biochemistry, said.

Instead of referring to the machine as a spectrometer, it should be called a “spectroscopy” Parchamazad said.

“A spectrometer is the machine itself. A spectroscopy means doing research with the machine,” Parchamazad said.

The NMR gives a spectra or reading of a substance.

One of the more essential tasks it can do is molecular structure determination.

The entire project to build the facility cost around $1 million. Half of the funding was used toward the NMR itself, while the rest was used for site preparation.

Four proposals were written to different foundations to receive funding for this project. Professor of Biology Robert Neher, Jones, Parch­amazad and Senior Director of Grant and Foundation Support Heather Nishioka helped in writing the proposals.

Most of the funding was received from the W.M. Keck Foundation.

“I want to stress how much this was a joint effort,” Neher said.

Renovations were done to the room to make it suitable for the scientific instrument.

The ceiling was raised to make a safe distance between it and the NMR, a separate air conditioning was placed inside the room to keep the room and machine at a specific temperature and a ceramic floor was put in to absorb the moisture.

“It was things like this that caused us to pull our hair out,” Neher said.

The entire facility took six to eight months to build. Several tests had to be done to the machine before the open house could occur.

Speeches were given at the reception by Parchamazad, Neher and Jones, as well as President Stephen Morgan and Provost Alden Reimonenq.

After the reception visitors were allowed to see the spectrometer.

They were required to stand at a distance from the machine to ensure their safety.

During this time Parchamazad and technician Frank Moralez demonstrated how the machine worked.