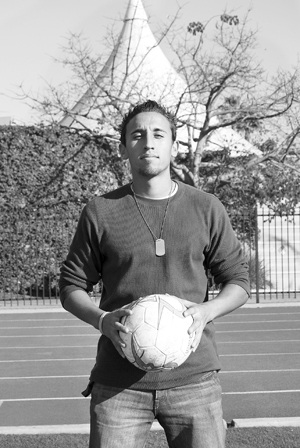 The men’s soccer team captain Francisco “Kiko” Escobedo has contributed much of his time and passion to the squad throughout his four seasons. This year, Escobedo led the team with eight goals and was named to All-SCIAC First Team. As a senior liberal studies major, Escobedo hopes to pursue a career in teaching following graduation. / photo by Wei Huang

It has been four years since Francisco “Kiko” Escobedo first stepped on Ben Hines Field as a member of the La Verne men’s soccer team.

Despite Escobedo finishing his senior season with a tough loss to rival Redlands, he has enjoyed a strong and memorable career at ULV.

“It was disappointing,” Escobedo said of his final game. “It didn’t hit me until the game was over and I realized those were my last minutes playing here.”

Although the Leopards dropped the 3-0 decision to Redlands, it does not summarize the kind of season and impact that Escobedo has had on the team since enrolling at La Verne in 2004.

A starter since his freshman year, Escobedo has dazzled teammates, fans and opponents with his play.

Patterning his style of play after Portuguese superstar Cristiano Ronaldo of Manchester United, Escobedo continued to develop his style and game throughout his four years of competition.

He also had to adjust his game to fit the rigors of playing at the college level and competing against bigger opposing players.

From the start, Escobedo had a flashy game with his strong dribbling skills and speed and with training he began to mold his body into a stronger, more powerful force – such a force that opposing teams now often double team him and always have him marked.

However an encounter with La Verne head coach Cres Gonzalez changed his mind and helped him choose La Verne to get his degree in Liberal Studies.

“I knew the liberal studies program was great (at La Verne),” Escobedo said. “And my tuition was all paid for so I thought ULV was for me.”

This season, Escobedo played one of his best seasons statically as he led the team in goals with eight and three assists while starting all 19 matches for the Leopards this season.

He also helped the team finish with a record of 8-9-2 and in fourth place in the Southern California Intercollegiate Athletic Conference.

In addition, Escobedo was named to the All-SCIAC 1st team this season, his first selection in his career at ULV.

“Kiko had an excellent year this year,” Gonzalez said. “I am extremely happy for him.”

After getting a split in their two games against Redlands during conference play this year, Escobedo and his teammates were unable to hold off the Bulldogs as they lost in the final minutes of their game in the SCIAC Tourna­ment, ending a strong season for the squad.

The game ended his senior year on a sour note but he now hopes to get into a teaching career with his degree.

“I’ve always enjoyed kids since forever,” Escobedo said. “I’ve noticed how much I enjoy teaching and how much they appreciate that from me.”

The team will have to make up for the absence of Kiko next season and all the intangibles he brought to the field every practice and game.

“He has helped stabilize this program,” said Gonzalez.

“He has been a big part of the transition in making the ULV men’s soccer program a respectable one.”

“I don’t think you’ll ever replace him,” said junior midfielder Joseph Valencia. “I’ve always considered him one of the best players on the team and he brought a lot to this team as far as his personality.”

By personality, many know Kiko in being loose and always messing around with his teammates on and off the field.

He also enjoys moving to different kinds of music whether in warm-ups before a game or hanging out.

“I love to dance and mess around,” Escobedo said. “I just hear the beat, dance and enjoy it.”

With his game and personality already part of his life, Escobedo now anticipates graduating from La Verne in May and becoming the first in his family to receive a college degree.

He is thankful to his parents and other family members in addition to his friends who have all helped him reach his goal in graduating and helped him with his studies.

“I am going to be real happy because it has been hard,” Escobedo said. “But a big part of it has been my parents and I can’t wait to hand it to them because I know they will be proud of me.”