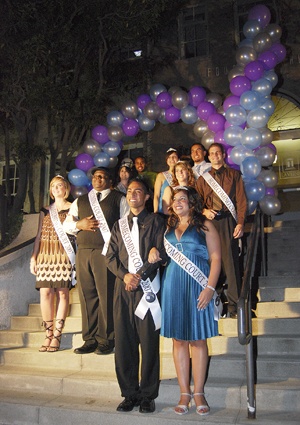 Illuminations, the traditional unveiling of the Homecoming Court took place in front of Founders Hall at 10 p.m. on Oct. 15 Ten candidates dressed from head to toe in formal wear strolled across the blue carpet in pairs. The pairs were: Mike Cordova and Monique Avila, Lauren Zagurski and Jon Smith, Lisa Tundis and Alex Lester, Stephanie Farrell and Walter Wade Worthy, and Michelle Ajemian with Jacob Delgado. / photo by Wei Huang

The blue carpet was rolled out in front of Founders Hall, and the University of La Verne’s 2007 Homecoming court sparkled under the stars Oct. 15 to kick off Homecoming week with Illuminations.

The “Starry Night” theme was only a glimpse of this years celebrations, which was themed “Another perfect season for ULV.”

“The significance of Illumi­nations is to showcase our Home­coming court,” said major events co-chair Christina Dobszewicz.

Illuminations are when the Homecoming court of five women and five men are presented to the student body, family and friends.

The nominees strolled down the blue carpet in their suits and cocktail dresses as detailed biographies filled with organizations, sports and clubs were read about each individual.

“It’s our first major event of the week,” Dobszewicz said. “It gives the clubs and organizations a chance to come support and cheer on who they nominated.”

The sparkling lights that covered the trees, the balloon arches and chocolate fountain at the reception table helped to set the ambience.

“I thought they did a really nice job,” Ajemian said. “It takes a lot of time to plan, even though it is over in 20 minutes.”

Ajemian, who put on the event last year, was part of this year’s Homecoming court and was excited to be on the other side of things.

“It was less stressful,” Ajemian said.

Students from sororities, fraternities and other organization came out to support their friends and take part in the festivities.

“It’s always fun to cheer on your friends,” senior social science major Katie Watkins said. “I’ve been to it the last two years, and it’s fun to see who’s nominated.”

While Illuminations brought out some of ULV’s finest it was just the beginning to the fun-filled week of special events.

On Oct. 20, ULV announced seniors Jonathan Smith and Stephanie Farrell as the 2007 Homecoming king and queen at halftime during the football game against Whittier.