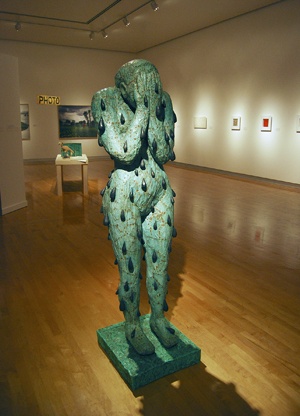 Scripps College graduate Alison Saar produced “Blood/Sweat/Tears,” a statue made of wood, covered in copper and bronze and painted with tar. The exhibition “L.A. Live” offers current works by artists active in Los Angeles. The Ruth Chandler Williamson Gallery at Scripps College will host the exhibit until Dec. 16. Other featured artists include Julia Meltzer and David Thorne. / photo by Wei Huang

The hall was abuzz as people of all ages attended the “L.A. Live: Contemporary Art in Los Angeles” art exhibit’s opening reception Saturday at the Ruth Chandler Williamson Gallery at Scripps College in Claremont.

There were several different pieces of art placed throughout the spacious and contemporary showroom.

With artistic styles varying from photographic elements to audio, there was something for everyone and for every style.

Intrigued, while also trying to understand the full meaning, Naohito Miura, a freshman Pomona College student expressed his interpretation surrounding the nature of a piece of photographic art which displayed images of common and uncommon landmarks that had been confiscated by public officials.

“It is mysterious why the pictures were detained, they don’t seem like secret places,” Miura said.

Artists Julia Meltzer and David Thorne clarified that their art is not meant as an outlet for political expression, but instead they are using it to raise awareness of society’s frenzy.

The image on the left was black and below the image there was a reference to a name or a location where the picture was detained.

The image on the right was a public image of a home, a bridge or a landmark.

Meltzer and Thorne said that it was created to bring attention to the hysteria that is raging through our country.

They realize that sometimes cameras are detained for good reason.

However they simply ask the question why should someone be suspect for taking a picture and how will someone learn something new about the landmark through that picture?

Thorne used the example that a journalist was covering a speech by Vice President Dick Cheney and his or her camera was confiscated because he or she was taking pictures of the hotel where Cheney was speaking.

Putting aside that the journalist was covering the story, Thorne raises an important question.

Thorne believes we live in a technological society where endless amounts of information are freely streaming around the world.

How would one photograph being taken reveal more information or even reveal something new?

Not all of the pieces were created from a political standpoint.

One piece featured in the exhibit was entitled “Blood/Sweat/Tears.”

The piece by Alison Saar was the first piece visible when walking into the gallery.

The piece was modeled after a human form, but was made out of a greenish metal and had forms that mimicked tears or sweat coming out of the figure from all areas of the body.

“My favorite piece is the statue because it is different and unique. It is sorrowful,” Tracy Surrell said.

Another interesting collection was photographs taken by Veronica Bailey.

The collection featured everyday items, such as pieces of mail and opened letters that were placed on their sides to show the letters contained in the envelopes.

The contents were placed in front of a dark background and lit from behind.

Through the lighting and colored techniques, the images uniquely popped with a modern, yet classic essence.

This fun and interesting exhibit will be on display through Dec. 16.

Cerina De Souza can be reached at cdesouza@ulv.edu.