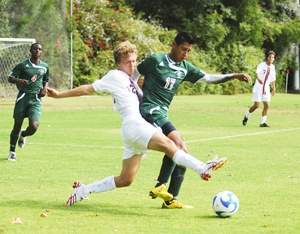 Max Lipset from Claremont-Mudd-Scripps struggled for possession of the ball with La Verne’s Mauro Veyn. CMS got the first goal early in the first half. ULV made a comeback by adding a goal at the first half and another at the second half. At the end of the game, the Leopards beat the Stags, with a score of 2-1 on Oct. 13. / photo by Wei Huang

To cap off another close game, the La Verne men’s soccer team scored in the 82nd minute to win on the road, 2-1, against Claremont-Mudd-Scripps on Saturday.

It was freshman forward Hector Lepe’s sixth goal of the season that proved to be the game winner for the Leopards.

“It was good to win. We needed a win lately,” said freshman defender Nick Pignotti. “Beating Claremont was pretty big for us because they had beaten us pretty bad before.”

Early in the game, the Stags got on the board with a penalty kick from CMS defender Tomislav Zbozinek, 1-0.

However, La Verne responded before the second half as junior defender Matt Dominguez notched his first goal of the year to tie the score, 1-1, going into halftime.

In the second half, both teams started with strong, physical play to result in a final tally of only 11 shots on goal by each side.

However, the deadlock was broken when Lepe was able to break free and finish the score for ULV.

“Hector (Lepe) has really been coming up big for us,” said senior midfielder Kiko Escobedo. “We are asking a lot from him but he is one of our leading scorers and he is only a freshman.”

With three conference games left, including just one match at Ben Hines Field, the squad intends to finish the season strong and with momentum.

“In the large scale, we want to get into the (SCIAC) Tournament,” said senior midfielder Beto Valle. “But we want to get four wins and beat Pomona because we haven’t beaten them in years.”

The Leopards were able to take one more step toward winning those final four games as they were victorious over Caltech on Wednesday, 5-0.

ULV dominated the Beavers from the start of the game as sophomore midfielder Brad Page headed in the first goal of the game in the fifth minute.

Only 11 minutes later, the Leopards scored again, this time on a finish by Dominguez as the Leopards went ahead, 2-0.

Freshman Wesley Lucas added another goal before the half as the Leopards increased their lead to 3-0 going into halftime.

In the 75th minute, freshman midfielder Donovan Mendova scored off a cross by Escobedo to make the score 4-0.

Escobedo also got in on the action as he scored 11 minutes later and registered his sixth goal of the season.

Overall, the Leopards tallied 21 shots on goal with two of the five goals coming off assists.

ULV goalkeepers Luis Moran and Adan Jaime combined for the rare feat of shutting out the Beavers without recording any saves, as Caltech finished the game without a single shot on goal.

With the wins, the Leopards improve to 6-7-2 overall and currently rank fourth in the Southern California Intercol­legiate Athletic Conference with a 6-4-1 record.

Up next for La Verne will be its final home game of the season Saturday at 11 a.m.

The team will then go on the road to face Whittier on Wednesday and Cal Lutheran on Oct. 24 to conclude the regular season.