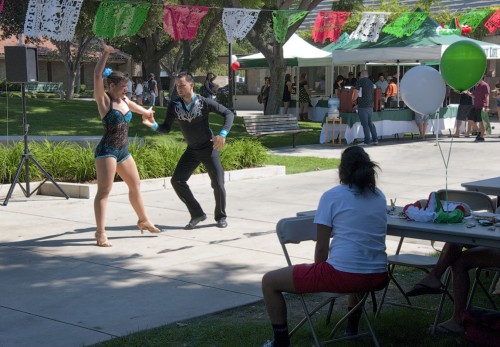 Sept. 15 marked the bicentennial celebration of Mexican independence. Bachata Caliente dancers Leslie Ferreira and Jorge Contreras celebrate Mexico’s independence from Spain in Sneaky Park. Ferreira and Contreras performed a Bachata-style dance for students. The dance style is a tradition in many Latin American countries, and is about experiencing a reawakening. / photo by Warren Bessant

The sound of Latin beats and the scent of roasted meats filled the air around Sneaky Park last week at a celebration to mark Mexico’s 200 years of independence.

The celebration, which included a variety of traditional music, food and dancing was sponsored by the Latino Student Forum and Campus Activities Board.

“Because Mexican independence is traditionally celebrated starting at night on Sept. 15, we planned this event for Sept. 16,” Marlene Zaragoza, LSF vice president, said.

The event marks the anniversary of a speech known as the Grito de Dolores, or Cry of Dolores, which was delivered Miguel Hidalgo Costilla shortly before dawn on Sept. 16, 1810.

The speech inspired Hidalgo’s congregation to unite and take up arms against the Spanish who were oppressing them. Ever since that day, the Grito de Dolores has become an important part of the annual celebration of Mexico’s independence from Spain.

Since this year is such an important anniversary, the LSF and CAB went all out in their efforts organize an enjoyable celebration of Mexico’s independence for their fellow students.

The dancers inspired a few attendees to get up and dance.

Attendees were also given the chance to participate in trivia and other games where winners were awarded prizes like gift cards to various local stores and restaurants. And there was even a short dance lesson.

The lunch included beans, rice, tacos, churros among other treats.

Sweet treats such as mazapan and tamalitos were also at each table setting.

“I was really happy that LSF has such a good turnout and I thought they did an excellent job with the decorations. They were really festive,” Marcella Marquez, senior English major, said.

The Grito de Dolores celebration in Mexico takes place every year on the night of Sept. 15.

The ceremony begins with the president of Mexico ringing the bell of the National Palace in Mexico City and continues with the president repeating a cry of patriotism similar to that of the Grito de Dolores, which includes the names of numerous heroes of the Mexican War.

Finally, the president shouts three times, “Viva Mexico!” from the balcony of the Plaza de la Constitución, which is one of the largest public plazas in the world. It ends with the president ringing the bell again, waving the flag of Mexico, and everyone singing of the Mexican national anthem.

Jason D. Cox can be reached at jason.cox@laverne.edu.