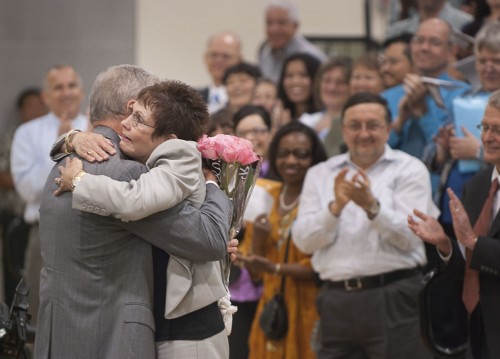 President Steve Morgan honors his wife, Ann Morgan, at the Faculty and Staff Recognition Ceremony last Friday in the Athletic Pavilion. The ceremony honored long standing members of the faculty and staff as well as those newly promoted. The awards included those for excellence in service as well as those for longevity. Those retiring, including President Morgan also were honored. / photo by Warren Bessant

The Annual Faculty and Staff Recognition Ceremony was filled with laughs as the University community honored its employees for excellence and longevity of service last week in the Athletics Pavilion.

About 300 community members attended to receive honors or support honorees.

The event awarded faculty reaching milestones such as promotion and tenure and also noted longevity milestones for faculty and staff in five-year increments up to 40 years of service.

Jimmy Paschal of the movement and sports science department was honored for his 40th year.

Additionally, five faculty members were honored with Young Scholars awards for their research.

Two faculty members, Felicia Beardsley and Ruth Trotter, were inducted into the ULV Academy for their research and creative accomplishments.

Administrative/professional employee of the year was Randa Jouzi, academic adviser in the College of Business and Public Management.

The prestigious Ellsworth Johnson Service Award honoring faculty went to Jack Meek. And the excellence in teaching award was given to Dorena Wright.

“Being selected for the Young Scholars Award was quite a humbling experience for me,” Hayes said. “I am really quite honored.”

“I had no idea in advance I was going to receive an award,” said Wright, a professor of English. “It was a well kept secret and a delightful surprise.”

“The faculty awards are always the highlight of the year and this year was no different,” Morgan said. “I enjoy the opportunity to celebrate the La Verne community.”

One of the last awards was an honorary degree awarded to Georgij Paro, an international theater director, who has produced annual plays at ULV for more than 20 years.

He received an honorary doctorate of humane letters, which is the highest award ULV gives. Paro, who is from Croatia, has directed more than 200 plays internationally and is currently working on “The Screens,” his 20th production at La Verne.

Morgan, who is retiring at the close of this semester, was also named President Emeritus and received an extended applause from those attending the ceremony.

“As my last year, it was especially meaningful to me,” Morgan said. “I think the tradition will continue on for years to come and I look forward to watching it. It has been a great privilege to be a part of the La Verne community.”

Blake Humphrey can be reached at blake.humphrey@laverne.edu.