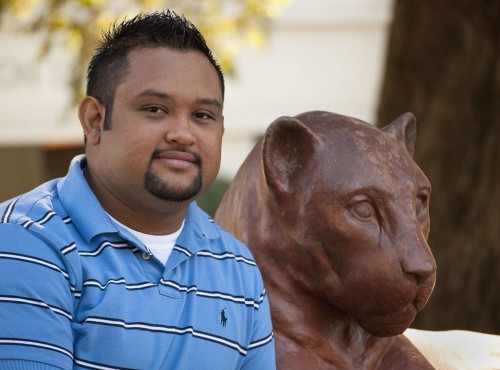 Alan Hernandez, who is working on his master’s degree in leadership and management, is a frequent participant in school events and organizations. He also serves as assistant hall coordinator in the Office of Student Housing and Residential Education. Hernandez is a favorite at new and prospective student events, which allow him to lend advice to those who are new to the University. Hernandez says Sneaky Park is one of his favorite places on the La Verne campus. / photo by Warren Bessant

In the five years that Alan Hernandez has been at the University of La Verne, he has not been able to keep a low profile. Not only did he recently graduate with two bachelor’s, one in art design and one in music, but he has also participated and held positions in numerous clubs and activities.

Currently, Hernandez is an assistant hall coordinator and an administrative assistant for the Office of Student Housing and Residential Education, where he helps oversee the students at the Sheraton Fairlplex hotel, works on the marketing plan for the housing department and helps with administrative work.

“I didn’t even know La Verne existed before I came here,” Hernandez said. “I could have gone to Stanford, but La Verne gave me a chance and I am happy with the result.”

Hernandez is from Chats­worth and attended Chatsworth High, where he played clarinet in the band. After graduating in 2004, Hernandez was forced to take time off from his education to help his family because of his parents’ separation.

“When my parents separated, I had to take on the fatherly role,” Hernandez said. “But eventually I knew I had to go to school. I could have kept working minimum wage, but I couldn’t support my family.”

Hernandez enrolled at ULV in the fall of 2006, and immediately took to the school. He joined the Residence Hall Association, Mu Phi Epsilon, Order of Omega and the fraternity Phi Delta Theta. He also founded the Multicultural Club Council, which helps organize cultural awareness activities and oversee multicultural clubs.

“My plan was to transfer to Stanford after two years, but I was able to obtain many leadership opportunities and graduate with two bachelor’s degrees,” Hernandez said. “I love La Verne because of the small class sizes and the relationships with students and faculty.”

In 2008, Hernandez’s father died of pneumonia. Instead of dropping out of school to move home, Hernandez worked harder to set a good example for his younger siblings, who are 11, 15 and 19.

“I am more of a role model for my siblings,” Hernandez said. “Being a first generation student, my parents didn’t know what it was about. Education is the biggest answer for breaking the cycle of poverty.”

This honors society recognizes the top 1 percent of student leaders in housing, and participants attend conferences around the United States.

This year, the students at ULV took home the Spirit Award, which is the highest award given at the conference.

“It was the first time I really saw the work I have done over the last four years pay off,” Hernandez said. “We developed practices and were able to use them, besides the fact that the whole group was freshmen.”

Besides working in the housing office, Hernandez is also a full-time graduate student at ULV.

He hopes to graduate in 2012 with his master’s in management leadership. He hopes to either run an organization or continue working with students at a college.

“I want to continue to grow as a leader and a student, as well as help people to grow,” Hernandez said.