By Michael Phillips, Warren Bessant on September 24, 2010 in News 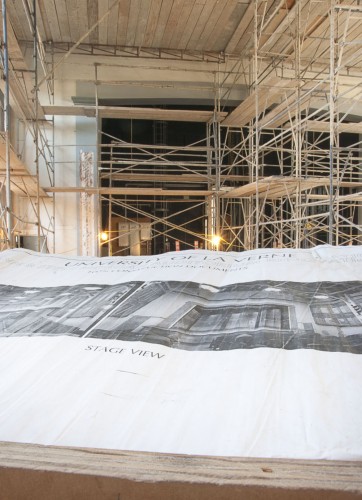 Founders Auditorium will be renamed the Ann and Steve Morgan Auditorium after its renovation is complete in the spring. The majority of those who donated money for the renovation required that it be renamed as a condition of their donation. / photo by Warren Bessant

This January the University of La Verne will unveil the renovated Founders Auditorium.

Completion of the long-anticipated revamp of this historic performance hall will be accompanied by a renaming of the hall, after University President Steve Morgan and his wife, Ann. Morgan will retire at the end of this academic year.

“We had been talking about remodeling for quite some time,” Morgan said. “I know we were raising money and moving ahead with the plans for the auditorium, but I had no idea they were naming it after me. They did an excellent job of keeping it a secret.”

In fact discussion of renovating the auditorium had been going on for the last 10 years; in April work finally began.

Founders Auditorium opened its doors in 1927.

By 1970 the auditorium was in bad shape.

The University had discussed the idea of closing Founders, renovating it, replacing the auditorium with classrooms and housing the music and theatre departments in the Dailey Theatre.

With this idea in mind, the University held one last closing event in Founders in 1974 showcasing the play “Man of La Mancha” for a student’s senior project.

“They pretty much just gave him the hall to do what he wanted with it,” Reed Gratz, professor of music, said.

“He and a bunch of guys got together they painted it purple for ‘Man of La Mancha,’ over the windows they hung these enormous canvases that covered each set of windows with big paisleys of lilac purple and white.”

However, when issues with funding arose, the Dailey Theatre plan never got started, leaving the University with an oddly decorated auditorium for some time.

In 1982 staff and faculty organized a committee to renovate the auditorium starting with the chairs.

“We all brought in our wrenches and pulled the wooden chairs out and threw them out the door,” Gratz said.

The old chairs were replaced with the burgundy theater chairs most recently used in the auditorium.

There was carpet added, the front curtain was replaced, ceiling lights were installed and the building was repainted to replace the purple.

The auditorium’s current renovation involves major changes to the inside of the auditorium.

Workers have left nothing of the past in the auditorium except the windows.

The seating is being redone, reducing the room capacity from about 430 to around 400 seats.

The outside of Founders Hall is to remain unchanged because it is considered a historical landmark.

Morgan recalled having classes in Founders Auditorium during his undergraduate years and thinking that it needed a modernization.

The motivation for the remodeling came from the need for a quality performance space, he said.

“Ever since I got to this University I have been yearning for a suitable concert space,” Christopher Kaelberer, music minor, said.

“Acoustics were a huge issue, a very expensive issue,” Gratz said. “Fortunately the money was raised to really do the acoustics first rate and correctly. The acoustics that were in place before had nothing to do with music. They were terrible. It was just a box that reverberated in the weirdest ways.”

Workers are putting in a handicapped lift, extending the stage about nine feet and creating more backstage space for performers.

For the acoustics, a shell has been installed to push sound toward the audience rather than up into the air.

“We are really looking forward to this, this is something the entire University has been waiting for,” Kathleen Lamkin, professor of music, said.

The renovations to the auditorium should be completed by January.

To celebrate the auditorium’s official re-opening and naming, there will be an inaugural concert on April 2.

“In the end we will have a historical and beautiful gem for the University,” Lamkin said.

Michael Phillips can be reached at michael.phillips2@laverne.edu.