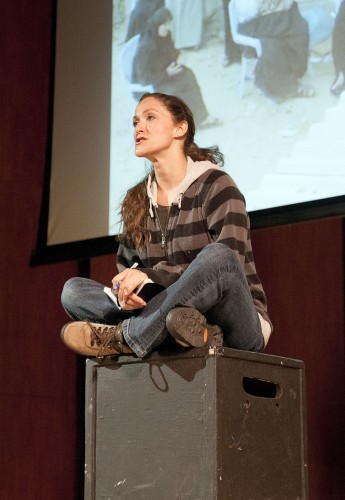 Samara Frame portrays title character Rachel Corrie on Saturday in Morgan Auditorium. The play is based on the journals and emails of Corrie during her membership in the International Soli­dar­ity Movement, a group dedicated to the support of the Palestinian cause through nonviolent protests. The play has been pulled or postponed from many venues because of its controversial political content. Its emotional content moved some audience members to tears. / photo by Warren Bessant

Rachel Corrie. The name has little meaning for those unaware of the young woman who died for social justice. However, the audience of about 50 on Saturday night in Morgan Auditorium learned the inspirational goals and heavy impact Corrie had during her 23 years alive.

First performed in 2005 in London, “My Name is Rachel Corrie” is a play created from the diary entries and emails by Corrie that was edited by actor and director Alan Rickman and journalist Katharine Viner.

The play is a one-person production that spans Corrie’s time in the Gaza Strip while participating in the Inter­national Solidarity Movement.

“(The play) made me sit back and ask what I’m doing with my life,” audience member Caitlin Bingham said. “She had a selfless desire to go out there and be together with people who needed help.”

The play begins with Corrie, played by Samara Frame, lying on a cot in her room chattering with the audience about her life growing up in Olympia, Wash. The audience gets an understanding of a character that is at conflict with her surroundings because she is impatient to start living life in every way possible.

Corrie describes herself as scattered, defiant and too loud as she cleans and packs a room that is a physical manifestation of her state of mind. Corrie prepares for her venture to the Middle East where she will work to aid Palestinian suffering under Israeli rule.

The play then takes a turn and follows Corrie’s days working in the Gaza Strip, which includes heartfelt interactions with refugees and dangerous encounters with government authorities.

Frame carried the weight of the play alone as she transitioned between Corrie’s different writings that were at times amusing, but more often painful. Frame had the engaging energy needed to hook the audience’s attention and stab at their emotions.

The props making the set were minimal: a cot on the left side of the stage, three black boxes placed further back on center stage and another placed closer to the front.

The speakers were used in a creative fashion to play recorded responses of Corrie’s parents to create dialogue for the lone actress. Recordings of gun shots and helicopters were also played to linger in the ears of audience members.

These sounds were accompanied with pictures and video to better portray life for the Palestinians. The images included refugee camps built out of rubble, large tanks gliding over remains of a city and the plane that crashed into the Twin Towers on 9/11.

Corrie’s response to these conditions, “I can’t believe something can happen like this in the world without a bigger outcry,” was met with sniffles from the audience.

During one part of the production, one audience member got out of her seat to give tissues to a crying member a few rows in front of her.

“She was so convincing, so inspiring, so passionate in the delivery of something as simple as emails,” Bingham, sophomore English major, said.

Corrie was portrayed as a young woman who had average wants but who could not stray away from helping those in need. Corrie said, “I want to dance around to Pat Benatar and have boyfriends (…) but I want this to stop.”

There was a chaotic frequency felt throughout the play until it hit a somber stall with Corrie’s final expression of sadness and frustration.

The conclusion of the play was followed by a discussion panel including Susan Angelo, the director; Bill Cook, professor of English; Steve Kent, director of the theater department; Jason Neidleman, associate professor of political science; and Frame.

Angelo said that the theater is a place for change and having an open discussion at the end of the play further promotes that idea.

In response to theater having a societal impact, Neidleman said that the Jewish history is steeped in victimhood and that he hopes the play can help develop a sense of responsibility for the Palestinian situation.

Al Clark, associate vice president for academic affairs, asked how one can oppose Israeli rule without being labeled anti-Semitic.

“You can’t discuss what you must discuss if you buy into that label,” Cook said. “I have to live with that reality to handle the issue.”

“This is something that’s going on in the world and it needs to be talked about, even if it makes people uncomfortable, because if it’s not talked about it won’t be resolved,” Bingham said.