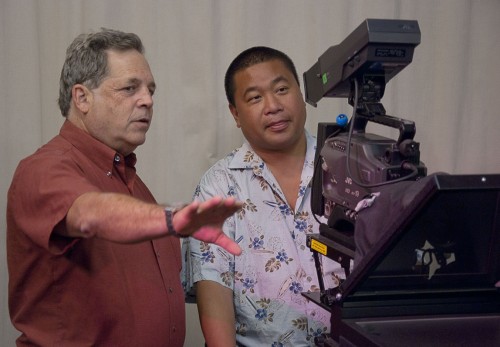 Professor of Communications Don Pollock and Radio-TV Operations Manager Shane Rodrigues have been instrumental in promoting the work of students in competition in the Western Access Video’s Excellence Awards. The WAVE awards, given to public access shows in the western division, fill the walls of the Arts and Communication Building and Rodrigues jokes that they are running out of wall space. Pollock enjoys beating larger schools, which have more students and better equipment. / photo by Warren Bessant

Several student-made productions from LVTV-3 placed in the finals for the Western Access Video’s Excellence Awards which honor the best public access productions in the Western United States.

Two of the six finalist videos even brought home awards.

The WAVE Awards are sponsored by the Alliance for Community Media’s Western Region and are held annually.

Winners were announced last Friday in Sparks, Nev., during a two day conference.

“We produce a lot of videos and I look at the categories and try to match the videos we produce to a category (in the competition),” Don Pollock, professor of communications, said.

All of the productions were broadcast on LVTV at some point within the last year.

The “Alf Museum” video was made by Geoffrey Ireland, Nick Pignotti and Phi Van Le for an advanced video class and won in the education category.

“Along the Way,” a senior project from spring 2010, is a 10-minute drama written and directed by Phi Van Le that won in the entertainment category. Fabian Baretto, Garrett Gutierrez, Geoffrey Ireland and Andrew Chapman also contributed to the project.

The Western Region in which the videos were judged covers Arizona, California, Colorado, Hawaii, Nevada and New Mexico.

According to Pollock the University of La Verne’s LVTV-3 station has brought back awards from the WAVE competition since the mid 1990s.

Pollock added that the productions made over the course of a year are often entered in several competitions. He said that while some productions may not have won in the WAVE awards they may win in another competition.

Several of the categories the videos were entered in include sports entertainment, performing arts coverage, magazine and a category specializing in productions focusing on the differently abled.