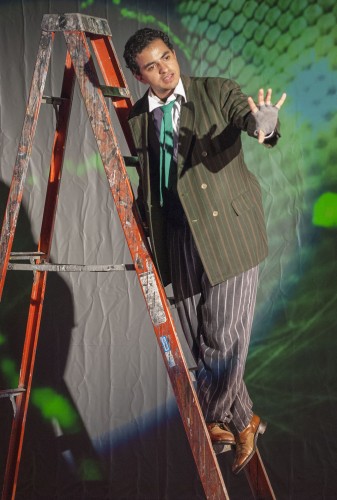 Envy, played by Alvaro Renteria, is among the sins characterized by coveting and insatiable desire. “The Virtuous Sinner Sideshow” was conceptualized, written, cast, directed, choreographed, composed and performed by students in the Theater 315 January interterm class. The story is about the seven deadly sins and the seven heavenly virtues portrayed through several anecdotes. / photo by Kelley Maggiulli

Dailey Theater was filled with intrigue and laughs as the Theater Arts 315 class performed its original production of “The Virtuous Sinners” on Feb. 8, 9 and 10.

Students in the class were given the task of writing and producing their own show in just four weeks.

Given only a pitch of ideas, together they spun a tale of the seven deadly sins and seven heavenly virtues all thrown together into a misfit sideshow.

“We chose the circus idea because it showed everything in its personified form,” sophomore theater arts major Cole Wagner said.

Dillon explained that he wanted the students to think outside the box; sins do not always have to be completely bad, nothing is black and white.

The show began with the ringmaster, Pride, portrayed by junior theater major Cody Goss, telling the audience about himself and the other acts that were to come.

One by one, each act continued on.

Some were funny, some were serious, and some were a little bit cheeky, but all were true to what the theme represented.

It was all summed up at the end when the entire cast broke into song in an entirely classic show-tune fashion.

The students spent at least five hours a day working on the production, and toward the end of it they had up to ten-hour days simply putting everything together.

Alfaro played the role of Wrath in the sideshow and also had a large part in managing the whole production by staying on top of students and helping with time management.

“Getting 14 different ideas and throwing them all together so they mesh is a lot harder than it sounds, there was definitely a little tension between all of us,” Alfaro said.

Along with the tension, the actors never had a chance to rehearse the full show until the night before opening.

They had to trust that what they planned in class would work in the final product onstage.

Even with all of the outside factors weighing them down, the students managed to create an interesting show that entertained those who attended opening night.

“It was great because a lot of it was really symbolic and it gave me a good laugh,” freshman biology major Jacki Rodriguez said.

“It’s a rare opportunity to get a group together and produce something original in a short time period,” Dillon said.

Overall “The Virtuous Sinners” brought a positive message to the audiences and left enough room for people to think for themselves, as well as share a laugh or two.

Alison Rodriguez can be reached at alison.rodriguez2@laverne.edu.