By Kelley Maggiulli, Veronica Sepulveda on May 24, 2013 in Arts, Etc., Movies 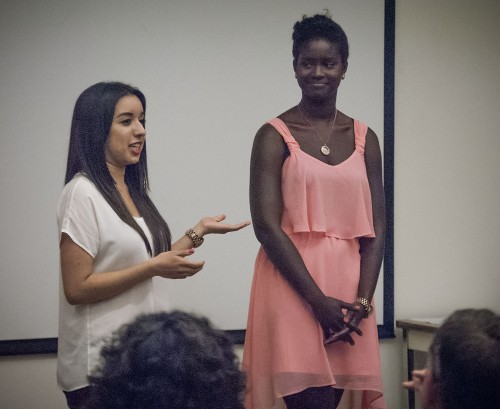 Laura Acevedo, producer and reporter, and Chelsea Stark-Jones, reporter, talked about their “Foothill Community News” show, also reported by Spencer Bruno and Ozzy Mora, at the Senior Video Screening on May 17. “Foothill Community News” is a bi-weekly student produced newscast and the video contained highlights of assorted weekly newscasts completed throughout the year. Acevedo and Stark-Jones both agreed that finding the stories on which to report was one of the most difficult challenges. / photo by Kelley Maggiulli

What started off as a thriller ended up being a comedy that would have the audience roaring in laughter.

The senior film screening on May 17 showcased four documentaries, a news show and a short film created by students as their senior projects.

Two of the documentaries were about ethnic tours in Los Angeles produced by Ozzy Mora. The others were about the La Verne volleyball and the Ben Hines field, produced by Chelsea Stark-Jones.

She showed a montage of the bi-weekly newscasts she produced.

One film that many people were anticipating to see was a 25-minute comedy, titled “Young Adults” produced by senior TV broadcast majors Anthony Troli and Kai Groschupf.

“I’ve always liked the idea of somebody who’s too smart for his own good, lie his way into dating someone who’s older then him,” Troli said. “As it evolved it became this hopeless romantic.”

Troli and Groschupf began thinking about making this their senior project in spring of 2012. The original idea was to create a thriller.

“At the beginning, I was disappointed, because I made it clear to (Troli) I didn’t want to make a comedy, I wanted to make something more serious like a thriller,” Groschupf said.

“We tried to come up with something but over the summer we realized we were going in the wrong direction. Anthony is a funny guy, he needs to write comedy,” Groschupf said.

The film was nothing short of hilarious. As many people in the audience could relate to having that awkward dating experience and having a friend that is out of control.

The audience was laughing hysterically as the story line continued.

The film is about Tommy and Myles, best friends who just graduated high school, seeking to find a girl for Tommy to lose his virginity to before he goes off to college.

The friends run into a girl named Claire in a park and proceed to hit on her.

Claire is a college graduate who studied mythical languages, feels misplaced from the world and is trying to find a job before she gets kicked out of her parents’ house in two months.

Tommy and Claire end up hitting it off, however, Claire believes Tommy is a college graduate and not 18. The quirky comedy continues with the story of how they fell in love and how the truth eventually comes out.

“Anthony is a very articulate director and I feel we are able to understand each other very well which made the process that much more fun,” Alycia Lourin, lead female actress, said.

“As a film, it is a collaborative art, it’s more than just the actors, it’s the actors and the crew and the whole story coming together. It’s a great experience.”

“The best part was working with such an amazing crew, they are just as passionate about film as I am,” Troli said. “At the end of the day we really pulled it off.”

“We can’t wait what’s next, and where this would go,” Troli said.

There will be another screening of the short film at the Claremont Laemmle Theater at 11 a.m. May 26.

Veronica Sepulveda can be reached at veronica.sepulveda@laverne.edu.

From the dance floor to first base
First-person experience: Taking a walk on the wild side