By Kelley Maggiulli, Sydney Daly-Weber on March 8, 2013 in News 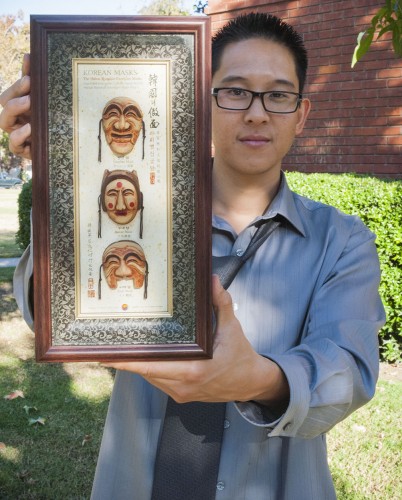 Professor of Sociology Roy Kwon, who is now in his second semester as a full-time professor at the University, earned his bachelor’s degree in 2005 from UC Irvine. He earned his master’s degree in 2007 and doctorate in 2011, both from UC Riverside. Kwon has traveled extensively, not only within the United States, but also to Kenya, South Korea, Hong Kong and Great Britain. While he was in South Korea he acquired a frame with Korean exorcism masks. / photo by Kelley Maggiulli

It is a strange occurrence when one class changes your whole life.

For sociology professor Roy Kwon, now a full-time professor teaching his second semester at the University of La Verne, that is exactly what happened.

Kwon started his college career at the UC Irvine with the plan to major in computer engineering.

Little did he know that after one sociology class, his life would lead in a whole new direction.

During his first sociology class with professor Chuck O’Conell, Kwon found himself falling in love with the subject.

“I know it sounds cliché, but it was love at first sight.”

Kwon said he has such a passion for sociology because he believes it is a way of looking at life.

It gives him the tools to think of life in a unique way.

After he finished his studies at UC Irvine, Kwon went directly to the Ph.D. program at UC Riverside for six years.

There, he learned from UC Riverside’s sociology department chair that ULV was looking for a part-time sociology professor.

When Kwon teaches, he said he tries to bring the same type of passion to his classes as O’Conell did.

The way he looks at it he said, the more exciting and interesting he makes the class, the more the students will learn.

“I have never once fallen asleep in his class, and that’s saying a lot.”

Kwon uses diverse teaching techniques. He feels that lecture is important, but he also tries to integrate controversial topics into those lectures to spark a heated discussion.

“Learning is not a spectator sport,” Kwon said. “If I just stand there and lecture, students will fall asleep.”

One of Kwon’s favorite surprises is when a student challenges him.

Even though he is the expert on the subject, he enjoys when students question him throughout the class and wishes students would ask more questions than they already do.

“He actually tries to get students to understand the material,” Michael Jimenez, sophomore athletic training major, said. “He doesn’t just move on right away.”

Kwon said his hard work is a reflection of what his parents taught him as he was growing up.

His parents immigrated to the United States from South Korea in the late 1970s. Kwon was born in Koreatown in 1983 and growing up he had to watch them struggle with finances.

Seeing how hard they always worked for his family made him want to be successful.

“My entire motivation is based on my parents,” Kwon said.

Sadly, Kwon’s father died a couple of years before he actually became a sociology professor.

He said that has been one of his biggest regrets: His father did not get to see him as a professor.

As the eldest son, Kwon said he had to stay strong for his family.

Now, his mother is his one true source of inspiration.

She was diagnosed with breast cancer a couple years ago and even through chemotherapy, she stayed strong and kept fighting despite all of her struggles.

“She has showed me that no matter what, I can get through anything,” Kwon said.

Throughout his life, Kwon has lived with the simple knowledge that money is important, but happiness is much more important. This mindset is what keeps him moving forward.

“You gotta love what you do,” Kwon said. “If you find something you love doing, you’ll never feel like you’re working.”

His family and his job are what keep him truly content, Kwon said.

“This is what I was destined for,” Kwon said. “It doesn’t feel like work to me.”

“I know it sounds demented, but I do research as my pasttime.” he said. “It’s relaxing.”