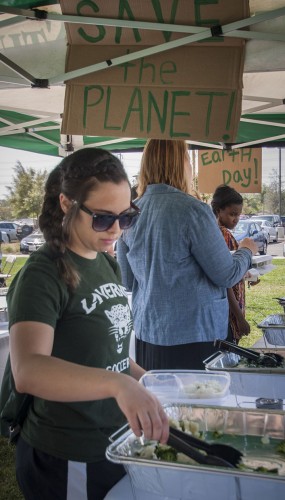 The Campus Activities Board hosted “50 Shades of Green” Monday in the South Quad to celebrate Earth Day.

“I think in the past the environment has been abused and now we’re trying to change it up and be better to Mother Nature. It’s a pretty important day and I think it’s important that we celebrate it.”

Each year, Earth Day, April 22, marks the anniversary of what many consider the birth of the modern environmental movement in 1970, according to earthday.org.

The event at ULV had cardboard signs up that read “Save the planet!” and “I used to be cardboard, now I’m a sign.”

There was a demonstration station where Bon Appétit was serving a low carbon diet meal, which included an edamame burger topped with sumac-spiced carrot peels.

The burger was an acquired taste for many but students still lined up to get one for themselves.

Toni Morbitt, an assistant manager for Bon Appetit who does not work at the University, put together the demonstration.

“A low carbon diet is about reducing your mileage with purchasing vegetables and produce that are locally grown,” Morbitt said.

“It’s also being aware of what animals produce into the environment. The edamame burger reduces the production of beef and cheese because cows produce a large amount of methane.”

Morbitt also said buying fruits within a 150 mile radius of where you live is better for the environment.

She also said that Bon Appétit has always tried to produce a low carbon diet for the University.

This includes reducing the portion sizes of meat served at Davenport Dining Hall, ensuring that all vendors are local businesses and using produce that is grown within 150 miles.

Many students and staff feel that the school should do more than just have an event once a year to recognize the environment.

The University has made recent efforts to “go green” with the installation of water bottle refilling stations throughout campus.

“I think the refilling stations that ASULV put in are really good, I use them all the time,” Gonzalez said. “I know last year they had ride your bicycle to school day, so maybe encouraging people to do that more often and have a lot of small events rather than just one big one.”

“There should be more carpool options because there are so many commuters,” English Language Services instructor Kathleen Juten said.

“They should also have more bicycle infrastructure because a lot of people don’t think it’s cool. I also think the school is doing a good job with the lunch containers and the water fountains, but they should also raise awareness that driving isn’t they only lifestyle”

Juten said she has not had a car for 10 years and tries not use fossil fuels and thinks more students should welcome this lifestyle because La Verne is such a small city.

The University is taking small steps to becoming more environmentally friendly in the forms of LEED certified construction including the gold certification of Vista La Verne residence hall and the silver certification of the Campus Center.