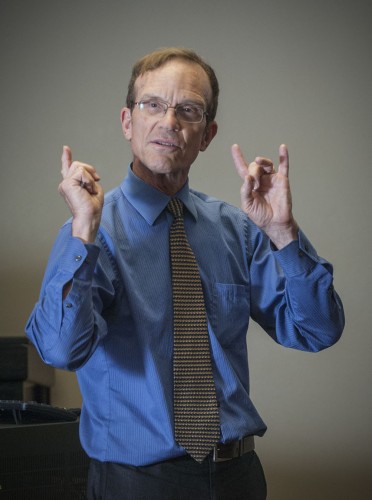 Al Clark, associate vice president of academic affairs, presents “ Water, Watershed and Warming: An Environmental History of the San Gabriel River, 1542-2042” at Monday’s faculty lecture. Clark, who has been researching this topic since he was an undergraduate, is compiling his research into a book. / photo by Kelley Maggiulli

Al Clark, wearing a watering can with flowers neck tie, gave students and faculty a quick glimpse into his upcoming book about water, watershed and warming in the President’s Dining Room Monday.

“All water is reclaimed water even if it you get it out of the tap or in a bottle, it’s still dinosaur pee,” Clark said.

Clark has been behind the scenes coordinating the colloquium faculty series at La Verne and decided to share the project he has been working on for more than 43 years.

The audience first started off viewing pictures of the San Gabriel Mountains, rivers and valleys where the peak of Clark’s interest was found.

Being a native to Azusa, Clark wanted to dig deeper into the past, present and future dealings and causes of watershed and global warming in the surrounding areas of California.

Although his soon to be 280 page book goes more in depth, Clark managed to show the audience what he has been researching for years.

The audience was surprised to hear that Clark believes global warming first started during the Spanish Watershed of 1769-1820.

This was also during the time when the Spanish began to start the irrigation of water and cement and brick buildings were first starting to be built, resulting in an astounding number of deaths.

After a brief insight on the past, Clark introduced the new times and ideas that are currently present today, like conservational ideas, agricultural watershed, such as nitrate fertilizers, and the start of dam’s being built.

“This is stuff we’ve been hearing a lot about living here in California, it brought all the focus about water and conservation all into one and helped me understand a little more,” Mary Miller, junior mathematics major, said.

Clark hit key points on the Reclaimed Water aspect that began in 1962 and is currently still used in the present.

Toward the end of Clark’s presentation, students in the audience were hit with some facts that will affect the majority of them and their generation.

Clark said that in the Future Watershed of 2013-2042-2100, there will be less rain and more droughts, not only in Southern California, but worldwide.

Also, water-waste treatment and recycling will become the No. 1 source of new water from people.

For example, we will have to start collecting rain water in barrels.

In addition, because the ocean will reclaim the lower watershed, we might see the beaches gone soon.

“The problems we’re facing locally is kind of scary to see where we’re heading to as a society,” Cristobal Gutierrez, senior psychology major, said.

Clark mentioned the idea that because the ocean will reclaim the lower watershed, that we might see the beaches gone soon too.

“I learned a lot about how it’s important even locally for global warming and environmental concerns because it’s easy to just think it’s so far away,” freshman business communications major Melanie Loon said.

“I was very interested in attending this one because it was Al Clark’s presentation and I wanted to see what his in particular was all about,” Miller said.

Clark hopes to finish his book so that future generations can help take preventive measures for the future regarding our world and its water.

“It’s easy to just think it’s so far away and doesn’t matter, but hearing how it affects places that are so close by was pretty effective on me towards conservation and recycling water,” Melanie Loon, freshman business communications major, said.

Letter to the Editor
Uniform inspection