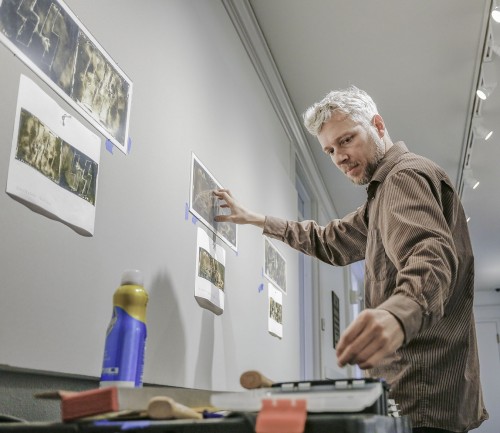 Photography Department Manager Kevin Bowman arranges prints for “Emblem and Artifice: Withered Symbols of the War,” photography by J. Jason Lazarus, in the Carlson Galley. The exhibit features symbols of World War II on expired Kodabromide photographic paper from 1945. A reception with the photographer will be at 5 p.m. Nov. 10 in the Carlson Gallery. The exhibit runs through Dec. 16. / photo by Megan Peralez

The paper expired Aug. 1, 1945, five days before the Hiroshima bombing.

Lazarus said the inspiration for the theme comes from a variety of sources.

“Part comes from a childhood visit to the Dachau concentration camp,” Lazarus said. “Another part comes from the current political climate. I feel like we’re making some of the same mistakes that we see in that time period of World War II.”

The photographs feature symbols from the war that carry different meaning when looked at with different perspectives.

“I watched a lot of documentaries and read various stories about the war to select symbols,” said Lazarus, who is also an adjunct professor at the University of Alaska in Fairbanks.

“I made sure to use symbols from all sides and show the dual meanings that each symbol has. For example, as much as the swastika was a symbol of hate, it also inspired people on the German side during the war.”

Lazarus said he hesitated creating the piece with the swastika because he wanted to focus on lesser-known symbols from the war. The piece in the gallery does not feature the full depiction of the swastika, as Lazarus feared that hate groups would use his picture to forward their messages.

“It’s a symbol for hate,” Lazarus said. “It was originally a symbol of peace but it was morphed into a symbol of hate. I didn’t want anything to do with that.”

“I think it’s definitely very interesting,” junior photography major Spencer Croce said. “I like that he used original 1945 era paper to recreate the symbols. I’m not entirely sure what he’s trying to say with it all. I think he’s trying to bring relevance to today.”

Professor of Photography Gary Colby, director of the Carlson Gallery, shared that the “Emblem and Artifice” exhibit is consistent with the Lyceum theme for the University, which is traditions, tensions and transitions.

Colby also shared that the exhibit can tie into University history.

“During WWII the University fell onto desperate times and it was with the skill and durability of the faculty and staff that the University survived.”

Colby said the repurposing of the Kodabromide paper was able to create a meaningful collection of photographs.

“I met him at a Society for Photographic Education conference,” Colby said. “He is a thoughtful and practical photographer.”