By Gabriella Chikhani, Megan Peralez on November 21, 2014 in LV Life 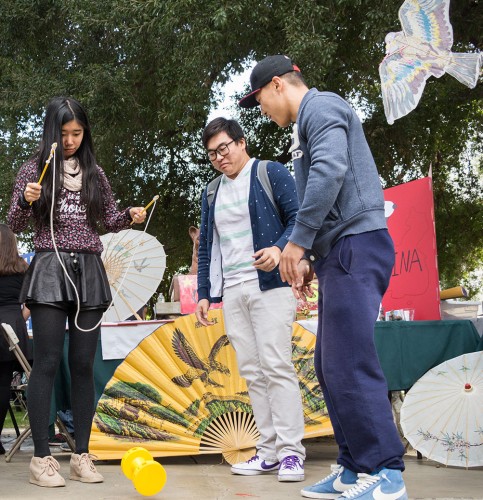 More than 300 students enjoyed food from all over the world, played games and learned about different cultures at the 24th annual International Education Festival from 11 a.m. to 1 p.m. Nov. 18 in Sneaky Park. / photo by Megan Peralez

More than 300 students enjoyed food from all over the world, played games and learned about different cultures at the 24th annual International Education Festival from 11 a.m. to 1 p.m. Nov. 18 in Sneaky Park.

“We host this event every year in honor of the international education week and we try to promote different cultures especially here at La Verne,” Stephanie Lira, senior English major and International Students Organization president, said.

“We try to promote the diversity that is here on campus and share each one of our student’s cultures with everyone.”

Twenty countries had booths lined up as a pathway for students to visit.

The booths were mainly lead by members of the ISO and they each showcased their culture, traditions and food.

Students could get henna from India, play backgammon in Greece, grab a fortune from China or sip on Arabic coffee in Saudi Arabia.

“There were many Asian countries, Middle Eastern countries and Latin American countries so I thought there was a great variety shown.”

Booths such as Jamaica, Vietnam, Mexico and the United States had balloons in the colors of their countries’ flag tied to their table to help students find the country they were interested in.

“Mexico was my favorite booth because they were serving aguas frescas and that’s just a favorite treat of mine,” Baca said.

There were flags from around the world hanging from the balcony of the library and waving in the wind as the students put on performances consisting of singing and dancing.

Some of the acts included the barbershop quartet who began the show with their version of the 1967 hit song, “Happy Together.”

There were also Spanish and Tongan singers as well as Polynesian and Greek dancers.

“I think it’s so important to be culturally competent and to have the capacity to work with people different than you in the real world,” Lira said.

Lira says that during her time with the ISO she has made lifelong friendships with people from South America, Japan and Saudi Arabia.

“We do have a very large international student community and we try to make it as easy as possible for them to assimilate into the American culture,” Lira said.

“It’s a great way for people to learn about other cultures and the world.

The Associated Students of the University of La Verne collaborated with ISO to put the event together.

They began planning for the event a month ago and arranged for Davenport to serve Italian food.

There are more than 20 active members in the Inter­national Students Organization.

“I feel like they stepped it up a notch this year because there were a lot more booths, they had dancing and musical events and it was advertised better,” Baca said.