By Chris McMahan, Megan Peralez on May 5, 2017 in Baseball, Sports 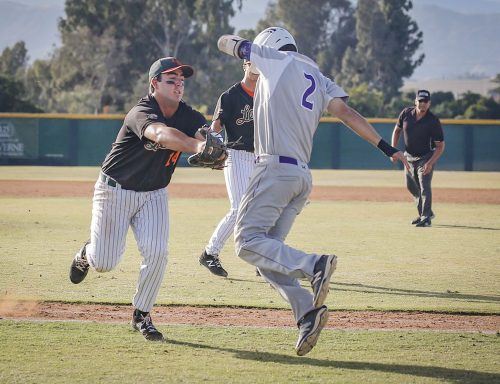 La Verne senior first baseman Jakob Thomas tags out Whittier junior second baseman Andrew Lamar on his way to first base during the eighth inning April 28. The Leopards chased down the Poets, 10-9, at Ben Hines Field, with four runs in the eighth inning. / photo by Megan Peralez

The Leopards beat Whittier, 10-9, on senior day in their last home game of the season April 28 at Ben Hines Field.

La Verne improved their Southern California Intercollegiate Athletic Conference record to 15-7 and their overall record to 21-16.

“It was extremely important for us to win for our seniors,” freshman pinch hitter Dylan Alhanati said. “They devote a lot of time and effort to leading our team so we had to give an all-out effort to win for them.”

Sophomore right fielder Chris Ligot then tripled to right center field to score Peres and give the Leopards a 2-0 advantage.

After another scoreless inning by Whittier in the second inning, senior shortstop Andrew Douglas singled to right field to score senior catcher Dylan Lowenstein and give La Verne a 3-0 lead.

The Poets responded in the top of the third inning with two runs of their own, after a single to left field by junior first baseman Matthew Macey scored senior center fielder Tanner Marcoe and junior third baseman Charlie Mayfield, narrowing the Leopards lead, 3-2.

Lowenstein then flied out to center field, but it was hit well enough to score Peres from third base, increasing the Leopards lead, 5-2.

Despite a three-run deficit, Whittier would not go away quietly. Senior center fielder Tanner Marcoe singled to right field to score junior catcher Michael Angulo and cut the lead, 5-3.

In the bottom of the fourth inning, Peres hit a double to left center field to score Thomas, who was 2-for-2 with four runs, giving La Verne a 6-3 lead.

Whittier’s senior left fielder Jake Raynard then hit a three-run home run in the fifth inning to tie the game, 6-6.

Whittier broke the tie in the eighth inning after sophomore right fielder Brandon Mulrooney hit a single to left field, scoring Marcoe and giving the Poets their first lead of the game, 7-6.

Later in the inning, Mulrooney would reach home on a fielder’s choice and Raynard would single to center field to score Macey, giving Whitter a 9-6 lead.

After holding the lead for much of the game, La Verne would now have to rally.

Peres forced a walk at the bottom of the eighth inning to load the bases and after a wild pitch, Jacob Benson scored from third to narrow the lead, 9-7.

A single by Ligot later in the inning would score Peres and Thomas, tying the game, 9-9.

Freshman pitcher Cody Norman then made quick work of Whitter in the ninth inning, giving the Leopards a 10-9 victory.

“It was great for the seniors to get a win in their last home game,” Thomas said. “We try to win every home game, that’s a team goal, so it was good to start off with a W.”

La Verne finished up the season with a road trip against Whittier, where they lost both games and fell to the fourth seed in the SCIAC tournament.

“We gave up too many runs when we were ahead,” senior Anthony Gonzalez said. “We struggled in every aspect of the game on both games Saturday. Defense wasn’t as good as it has been, but neither was our offense and pitching.”

The Leopards will open the tournament at Cal Lutheran, against whom they are 2-1 this season, at 3 p.m. Friday.

“We have been in this spot before,” Thomas said. “The 2015 tournament we went out and won our first game of the tournament against Cal Lutheran. So, we know we have a tough road ahead but we are all looking forward to playing against some good teams.”