By Christina Garcia, Sarah Vander Zon on October 28, 2016 in News 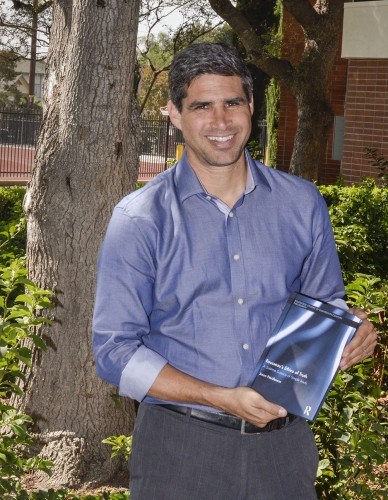 Professor of Political Science Jason Neidleman’s primary area of research is Jean-Jacques Rousseau’s philosophy of truth and truth-seeking. His book, “Rousseau’s Ethics of Truth: A Sublime Science of Simple Souls,” was published by Routledge in September. Neidleman focuses on the path Rousseau took to the truth. After completing his doctorate in political science at Harvard University, Neidleman began working at the University of La Verne in 2001. / photo by Sarah Vander Zon

Neidleman, a native Californian, studied political science at UCLA and earned his doctorate in political theory at Harvard.

Recently, Neidleman sat down for an interview and discussed the idea that sparked for his book and upcoming projects he is working on.

How long did it take for you to work on your book?
I’ve worked on it for about 10 years now. The reason I say 10 years is because I was at a conference on Rousseau’s Reveries, and either at the conference or shortly after the conference it struck me that the argument or the interpretation that I had of the Reveries could be applied in slightly different form to Rousseau’s other texts. That was the spark.

Is there anything specific you hope to accomplish following this book?
Definitely. About five years ago I started another project on power and legitimacy, which emphasizes the role that elites play in the management and manipulation of public opinion. Rousseau would be a critical figure there, but it would definitely expand far beyond the bounds of Rousseau. More recently, I had this idea for a project that would look at the role that the web had played in transforming the public sphere and the way we engage with one another.

It would be about the philosophical tradition and what it might have to teach us about the way we engage one another in cyberspace.

You might say it should have nothing to teach us because they are all writing in a pre-Internet era, but I actually think precisely the opposite is the case.

Rousseau was concerned with the ways civilization alienated us from our natural condition, and we are now concerned about the ways in which a life in cyberspace might be alienating us from more immediate, intimate forms of social interaction. I think the tradition might have something important to tell us about that, and I haven’t seen anything written on that yet.

Are there additional projects on your mind other than the one you explained?
Well I have a couple things that came out of the book. I have a chapter coming out in a book on Rousseau and Adam Smith, and it’s on the role of elites in managing public opinion. I have another chapter that’s going to be published in the Routledge Encyclopedia of the Philosophy of Evil, it’s on Rousseau and evil. I was invited to write that chapter because my editor recommended me based on my latest book. I’m doing something on politics and tragedy, which also looks at Rousseau.

I have another thing I’m working on, which is English translations of Rousseau in the 18th century. I have many things in the works.

How do you keep up with all these projects: as a professor, chair of the department and your family?
I fail to at times. It’s hard during the semester when there are so many other responsibilities. I’ve already submitted a draft for Themes on Smith and Rousseau. It’s coming out with the Edinburgh University Press next year, so that’s basically done. I finished a draft of the chapter on Rousseau and Evil. Part of what happened is that I was working on the book for 10 years, and then I got a sabbatical.

It was odd timing for the sabbatical, because it came as I was finishing the book. So on my sabbatical, I worked on all my smaller projects, and now I’m submitting those to various places. You have to prioritize your research and scholarship because it’s an important part of your responsibility as a professor. I’ll credit the University for making sure faculty have time to do research and scholarship.

How long have you been working on your current projects?
I’ve been thinking about that project on power and legitimacy for many years, I even taught a special topics course here called the Art of Politics where I tried to raise some of those themes. I haven’t really worked on it in a focused way yet other than with the essay on Smith and Rousseau that’s coming out soon. In respect to possible projects, the cyberspace and philosophy one is very much in its infancy.

What are your thoughts on all your projects?
I have so many things that I’m trying to finish up that I’m anxious to get to the day when those projects are finished, and I can move on to one of my other two ideas for larger projects but it’s not usually how it works because it takes a long time to publish.

You have to go through revisions and resubmissions and rejections. In fact, three of the things I’m working on now are resubmissions. You definitely can’t be afraid to submit your work and have it criticized or even rejected. It’s a difficult process.

Do you have intentions to teach students more about Rousseau in your classes?
Definitely. Rousseau has a tendency to come up in most of my classes. As a professor it’s important to think about learning from the perspectives of the students, so sometimes as much as you want to, you can’t assign all the texts that you want to teach but the texts that are going to be the most useful to the students.

It would be fun to do a course on Rousseau, and then I would have time to get into all those texts.

Any advice you can offer to students who want to pursue research?
When you convert to Judaism, you’re told three times not to do it, and if after three times you still say you want to convert, then you are accepted as a convert to the Jewish religion.

I guess I would say something similar about doing a dissertation or writing a book. It’s extremely difficult, and the only way you’re going to make it all the way through is if you’re completely confident that you want to do it.