By Michael Savall, Shavonne Rogers on February 10, 2017 in LV Life 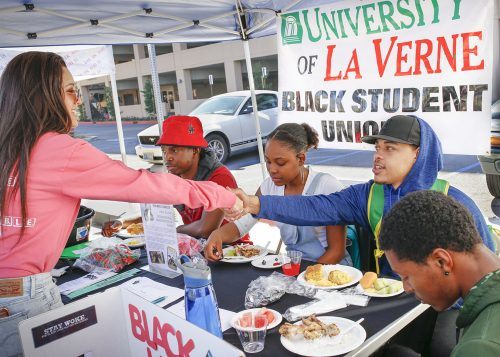 Sometimes it can be hard getting back in the swing of things, but clubs on campus make it easy for students to feel involved in campus activities.

The spring semester club fair, held Jan 30. and Feb. 1 had a board games theme, with each booth featuring a different game.

Among the more than 60 clubs featured in the two-day event, were the Black Student Union, Hawaii Club, Athletic Training Student Club, Her Campus and the Dance Team, all reaching out to potential new members.

The club fair offered the opportunity for students to learn more about extracurricular activities at the University of La Verne.

Angie Anderson, assistant director for the Office of Student Life, said she believes that student involvement on campus is essential to getting the full college experience.

“It’s one thing to have a valuable education of course, but I think a lot of the learning can take place outside of the classroom,” Anderson said.

“The Office of Student Life is about co-curricular learning. Getting involved in any way expands your education.”

The International Students Organization’s theme was Snakes and Ladders.

ISO’s goal is to bridge the gap between getting local and international students involved on campus, said the club president.

“We connect them together while giving the international students a more comfortable place, and also local students learn about different cultures,” said Matthew Wong, president of ISO and senior accounting major.

“Local students usually have a stereotype of international students, and the club is here to break the barrier between us.”

Although many people may not be familiar with playing games that do not involve a computer screen, the Board Game club keeps the old fashioned wave alive on campus.

Players work together on strategies and the mechanics of the board games, while having fun and making campus life enjoyable.

“We like hanging out, making jokes with each other and being friends,” said Joseph Eggers, president of the club and senior physics major.

Eggers also uses members of the Board Game Club to test out his new ideas.

He has created his own board games and is currently working on the final touches with his friends that are also involved in the club.