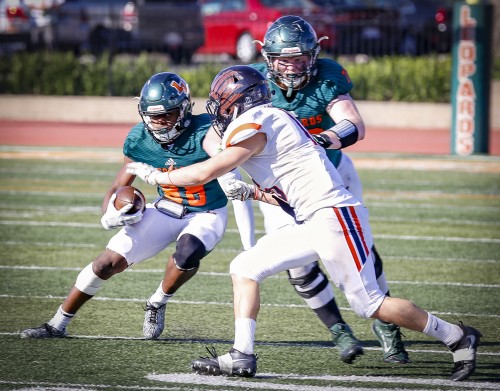 Sophomore offensive lineman Tyler Baeza clears the field of Sagehens as sophomore wide receiver Brandon Long covers ground in the fourth quarter Saturday at Ortmayer Stadium. Although the Leopards led most of the game, the Sagehens flew away with a 21-20 triumph after scoring a final touchdown in the fourth quarter. La Verne is now 1-7 overall and 1-5 in SCIAC play. / photo by Michael Savall

In their last home game of the season, the Leopards were tackled for a close loss by the Pomona-Pitzer Sagehens, 21-20, Saturday at Ortmayer Stadium.

The Leopards are now 1-7 overall and 1-5 in the Southern California Intercollegiate Athletic Conference. Pomona-Pitzer is 6-2 overall and 5-1 in SCIAC.

“When you play a close, tough game like that and you end up on the wrong side of the fence sometimes, it’s not easy,” head coach Chris Krich said. “It makes it that much harder knowing how close you were.”

“I’ve been here for three years, so all the blood, sweat and tears that we put out here is just one last time to play for them and play with them,” senior wide receiver Alex Arellano said.

Although the game was off to a slow start, the Leopards were able to make consistent plays throughout the first half. By the end of the first quarter, La Verne was up, 3-0.

Junior running back Robert Fernandez rushed for the first touchdown of the game in the second quarter, 10-0.

With 26 seconds left on the clock in the second quarter, a second field goal by sophomore kicker Eric Rembecky placed the Leopards up 13-7.

“Pomona is the type of team that tries to keep the ball away from our offense and I think when we had the ball and when we had our opportunities, people stepped up and made plays,” Arellano said.

Arellano received a total of four passes on 109 yards.

In the second half, Pomona-Pitzer was zoned in on making a comeback, rushing 23 yards for a touchdown to take a 14-13 lead.

Senior running back Dallas Parent rushed for a 69-yard touchdown, and the Leopards were able to end the quarter in the lead, 20-14.

“I thought our coaches did great of putting our players in places to make plays, and we had some players come up and make great plays left and right,” Krich said.

“It just so happened that there, at the end, we made a couple mistakes and didn’t give ourselves an opportunity,” he said.

Although the Leopards fought hard until the end, the Sagehens were determined to get a win.

“The last play of the game was a penalty, that can’t happen,” senior wide receiver Shawn Kagan said.

“When we made plays, when our defense made plays, just the small details is the discipline part that we need to work on,” he said.

Pomona-Pitzer scored in the fourth quarter, pushing the score to 21-20, and took a knee to end the game.

La Verne will face the winless Whittier Poets in their final game of the season at 1 p.m. Saturday at Memorial Stadium in Whittier.