By Erica Sanchez, Michael Savall on October 5, 2018 in News 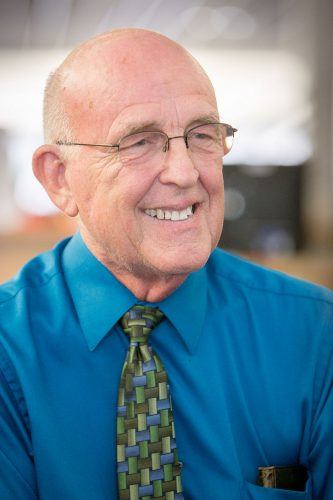 Dr. Marlin Heckman, former head librarian and professor emeritus at the University, died of a heart attack after swimming on Sept. 22. He was 79.

Dr. Heckman died in his residence at Hillcrest Retirement Community in La Verne.

Dr. Heckman attended the University of La Verne in the 1950s and returned in 1972 to work in the library.

He was a walking memory of the University, said Donna Bentley, librarian and research and instruction professor.

He spent around 30 years here dedicating his time to make the library what it is today, said Vinaya Tripuraneni, current head librarian.

The library originally was in Hoover Building, and Dr. Heckman helped with the transformation in making what once was an Alpha Beta grocery store into the Wilson Library, said Tripuraneni.

Dr. Heckman organized an event where students, faculty, and staff formed a human chain to transfer all of the books from the Hoover Building to the Wilson Library, Keeler said.

Dr. Heckman had many interests – the one that stands out was his passion for history and knowledge.

“He was a man of deep thought,” Al Clark, professor of humanities, said. “Maybe a little silly, it meant that he always seemed pensive, always in thought, always making sure that what he said was correct.”

Dr. Heckman introduced technology into the library because he knew that is where things were headed.

One of these contributions was implementing Linkplus which allows students to request books from other libraries, said Tripuraneni.

He wanted the students to use technology to help with their future.

He was very organized and dedicated to making sure the resources were possible, Bentley said.

Dr. Heckman not only shared interests in expanding the library but he played a large role in the archives.

“He was passionate about collecting the archives,” Clark said. “A large majority of the archives are here because of him.”

Dr. Heckman was highly trusted by the La Verne community, which led many people to give him old and unwanted artifacts, allowing him to create his collection of archives, Keeler said.

He maintained a close relationship with the students, and would go to school events and the faculty meetings, Keeler said.

He cared about the students, Tripuraneni said.

“His death was unfortunate because he had so much left to contribute,” said Clark.

Clark said Dr. Heckman was involved with the Church of the Brethren, and that community service was a large component in his life.

Dr. Heckman served the University of La Verne for three decades and left a lasting foundation for the Wilson Library to thrive.

“He took a grocery store and made it a library,” Keeler said. “It was his place, he was the captain of that library. He didn’t have much of a budget some years, in some of our lean years, but he made that library important, he made it so students wanted to go there.”