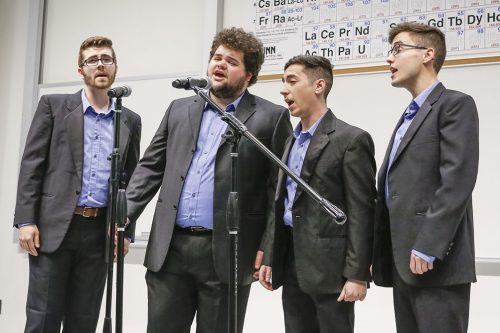 Some people look at barbershop kids as the nerds on campus, but the ULV Barbershop club held a tag contest Tuesday as a way to squash those stereotypes and educate about barbershop music.

Before they began, Hilario explained what a tag is to the audience. A tag, in barbershop, is the dramatic ending of a song.

For some people it was their first time experiencing barbershop harmony singing. Rachel Aspey, a sophomore political science major, enjoyed the hands-on experience.

“I enjoyed being able to hear the professional group sing and then also having them not only tell us how to do it, but they were with us, working with us, and that was really fun,” she said. “I felt like I was involved because it is one person to a part so I felt like they needed me in the quartet. They were really nice and invited me back.”

Toward the middle of the event, the audience broke into quartets. For fun, each foursome came up and competed for ULV lanyards.

“A quartet is split into four parts, but what you do with those four parts is what makes it wonderful,” Holder said.

Hilario’s mission as the president is to get people involved and to make sure they are having fun.

“We teach new people how to sing in barbershop harmony,” Hilario said.