By Alexandra Arkley, Shavonne Rogers on April 14, 2017 in LV Life 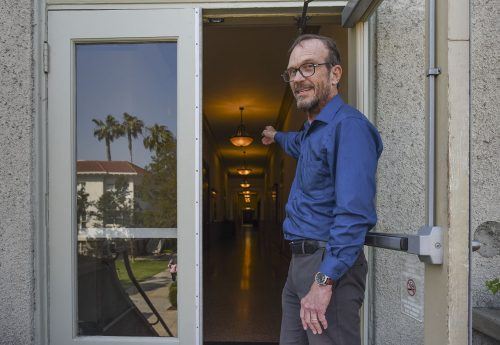 Al Clark, professor of humanities, shares stories about the University’s haunted history. The late Gladdys E. Muir had an office near the east, second floor door when she worked as a Latin and Spanish professor. Muir died after injuries sustained from falling down the east stairs in 1967. Muir is one of few faculty who have died on campus. / photo by Alexandra Arkley

From hearing footsteps when no one is there to feeling cold sensations on a warm day, La Verne community members stay they still sense the University’s haunted history.

Specifically some refer to the ghosts of Evelyn Marshalt, David Glassa and Jim Henderson, who they swear still linger.

Professor of Humanities Al Clark’s Oral History of La Verne archive features the story of a woman named Evelyn Marshalt. Marshalt was the secretary to former ULV President Stephen Morgan, who died of an aneurysm while asking for a raise.

Diana Towles, coordinator of veteran student success, told the story of Marshalt – and that she had an experience with Marshalt’s ghost in her first month of working in the president’s office.

“I would call and say there are mice, there are rats. There is something in this office that keeps rustling paper and tapping pencils and pens,” Towles said.

Marshalt did not have any family around so she was protective of Morgan and treated him as family. The ghost apparently came back to check on the former University president, Towles said.

Towles told of how one day she felt the ghost of Marshalt as a cold presence surrounding her. The next morning she shared that with Morgan, and he shared that he’d dreamt about Marshalt the previous night.

In the dream, they were at a train station, and Morgan asked Marshalt what she was doing there. The spirit told Morgan that she was checking on him, but he told her that she did not need to do that anymore because Towels was taking good care of him, so Marshalt got on the train and left.

“That was the last time we heard from Evelyn,” Towles said.

“I believe that if she is haunting Founders Hall, then whoever walks the halls is safe because she was a wonderful person,” D’Monte said.

George Keeler, alumnus and professor of journalism, told the story of his theater classmate David Glasa, who liked a girl named Debbie Steckel, who was also in their class.

After they graduated, Glasa went on to be the head of audiovisual at the University of La Verne. Glasa was broken-hearted because Steckel did not want anything to do with him. Glasa had keys to everything on campus because he was in charge of the technology. He got into the chemistry stock room, took cyanide and was found dead at his desk.

“He was a brilliant person, he just couldn’t get his life going in the way he wanted,” Keeler said.

After Glasa, the next audiovisual director, Doug Waite, told Keeler that he would be hear footsteps in the office. The lights would flicker, TV sets would turn on – even if they were not plugged into power and Waite felt something cold surrounding him.

“It got so bad that Doug did not want to be in that room anymore by himself,” Keeler said.

Jim Henderson was a theater student at La Verne in the 1970s. Henderson went to film a school TV project and he met up with a friend, a student from University of Southern California, in the Mojave desert, where Henderson was murdered.

There was a student up on the catwalk trying to adjust lights and he slipped and somebody put a hand out. The student grabbed that hand and did not fall. It was Jim Henderson, Flaten said.

Loud and Clear: United in the Streets: ‘Find your advocacy’ marches in solidarity against oppressive policy
Sexual assault awareness takes back the night