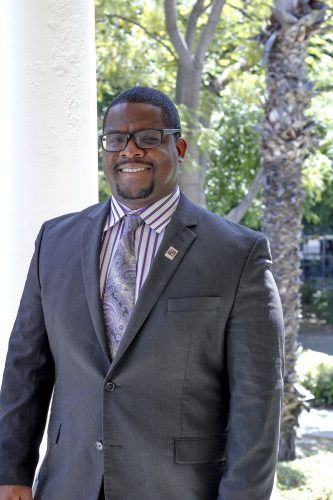 Thomas Allison, adjunct professor of speech communications, is an alumnus of the University of La Verne. Allison is founder and president of the Social Justice Advocacy Project, based in West Covina, which provides means of empowering community members in need. / photo by Tyler Deacy

Thomas Allison – the president and founder of the Social Justice Advocacy Project, owner of TD Allison Associates and adjunct professor of speech communication at La Verne – hopes to improve community interaction and address police brutality through his project.

The Social Advocacy Project is an action-based non-profit organization that seeks to provide empowerment tools to disenfranchised individuals and foster a closer relationship between the public and law enforcement.

“I want this to be the go-to community organization for collaboration, as this non-profit organization is like no other,” Alison said. “As the SJAP, I want to believe in the power of community engagement and social education, like it empowered myself.”

“Although I had the support of my family, I didn’t have a proper role model to look up to and that was part of my statement to create this project,” Allison said. “I am here now, with three jobs and I’m about to get my fourth degree. I’ve made my American dream become a reality and I want to support others to do the same.”

Allison also serves as a head mock trial coach and debate team coach at La Verne, as well as coach of the moot-court team in the National Black Law Students Association, as part of his passion in inspiring youth.

He said he may not have had a role model growing up, but he hopes to be a role model to students at La Verne.

“I attended the my first community event with SJAP called ‘Truth and Reconciliation,’ which was an open forum with the local community and police chiefs,” Anderson said. “I realized the importance for the local government to understand the community and student perspectives on recent happenings.”

Jeanette Ellis-Royston, president of the Pomona Valley NAACP, said she had been waiting for a community event to bring the public and police chiefs together.

The NAACP started out with one police chief for an event and Allison brought eight police chiefs and one sheriff from neighboring cities.

“We’ve been waiting for this, a positive group to bring the community together. It is been snowballing now to a point we are all so excited to see what comes next and we are only growing more and more,” Ellis-Royston said. “It’s important to keep in mind that everyone is human. Everyone has stories to share.”

Brittany Allison, Thomas’ wife and vice president of SJAP, said she was his No. 1 advocate for the project for one extra reason: their 1-year-old daughter, Antalya.

“Thomas is black and I am white, as our baby is 50/50,” Brittany Allison said. “I want her to grow up in a society where relationships like me and Thomas had less questions and less assumptions.”

She said she believes society should be more tolerant of democracy and free speech, to a point where the community can better engage with law enforcement.

Thomas Allison said he hopes to eventually create a charter school for disenfranchised youth and provide a mentorship program where collegiate students could mentor K-12 students.

Flora Wong can be reached at yuenyuen.wong@laverne.edu.