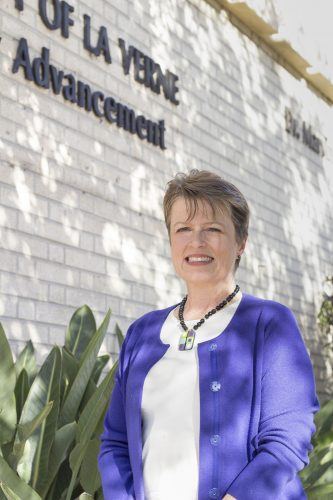 Sherri Mylott was recently hired as vice president of university advancement. Mylott moved to Southern California from Mary Baldwin University in Virginia, where she served as vice president of institutional advancement. Mylott holds a bachelor’s degree in government from The College of William and Mary and a master’s in public administration from Old Dominion University. / photo by Tyler Deacy

Snow blanketed the packed boxes the day the Mylott family moved out of their Virginia home. Sherri Mylott said to her husband, “This is why we’re really leaving.”

Mylott has worked in university advancement and development at several institutions such as Bennington College in Vermont and Radford University in Virginia.

Mylott and her family have always loved Southern California geographically, but when she met President Devorah Lieberman at a university presidents’ conference in San Diego she attended with her husband, she knew the warmer surroundings of La Verne was where she should be.

“She was a forward thinking, forward moving individual,” Lieberman said.

The school was not in search for a new vice president at that time, Lieberman said, but when Mylott’s name came up in the selection process, it was clear that she was the best choice.

Mylott said now that her children have all moved out – her youngest daughter is a freshman at Chapman University in Orange – it was the perfect time to make the move.

When Mylott worked at Virginia Tech, she experienced a completely different fundraising environment.

The number of students at Virginia Tech heavily outweighs that of La Verne, which requires more funding.

“Being at a place where I can see the impact of my work is important,” Mylott said.

She said La Verne makes that possible for her.

“Such a small campus provides the opportunity to see certain projects flourish rather than wonder where all the money is going,” Mylott said.

Mylott said she was impressed with the population of first generation students at La Verne.

Mylott came from Mary Baldwin University, where Mylott said 50 percent of the students are African American.

She served as vice president of institutional advancement at Mary Baldwin before moving to La Verne.

As a government major in undergraduate at The College of William and Mary, Mylott said she never imagined that her entire career would be non-profit, but has realized a passion for the work.

“The mission of the University resonates deeply with me,” Mylott said. “I do this work because of the impact it has on students.”

Mylott likes the fact that she can see students’ success as a result of projects she raised money for on this campus. Mylott’s husband, Paul Mylott, works in the fundraising field as well.

“I might not be the one to change the world, but I can educate the ones who will,” Paul always tells her.

Mylott said that her goal for the University is to bring the $125 million campaign to a successful close within five years.

“With Sherri, we will achieve that,” Lieberman said.

“We also hope to increase donor contribution so students will have more funding for scholarships.”

Lieberman would also like to see the Office of Advancement increase alumni engagement to promote involvement with on campus activities like sports games and Greek life events.