By Brian Rios, Tyler Deacy on February 10, 2017 in Softball, Sports 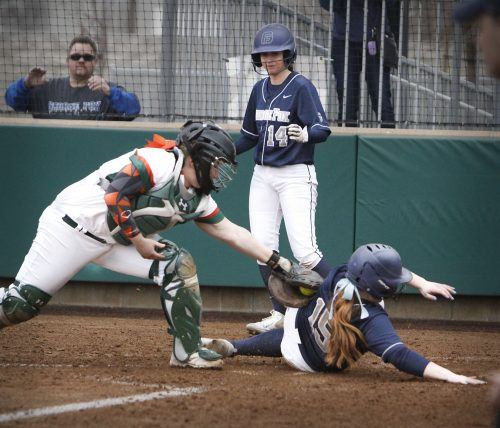 The softball team split the series against George Fox, losing 5-7 and winning the second 6-1, in a doubleheader Friday at Campus West.

The Leopards are currently 4-2 overall and will start Southern California Intercollegiate Athletic Conference play against Occidental Feb. 18 at Campus West.

“Our team motto this year is ‘limitless.’ We can win games if we come in with the mindset that we are limitless. We just have to keep our composure and not be complacent.”

The Leopards’ offense played sluggish and the Bruins’ senior pitcher Madison Sorensen helped her team control the pace of the game.

La Verne entered the fourth inning down 2-0, but came alive at the bottom of the inning when freshman designated player Justice Borden came to bat with Condon at second base and one out.

Borden scored on a sacrifice bunt. The Leopards were on the board, 2-1.

The Bruins responded with three runs in the fifth inning and the Leopards entered the sixth with their backs against the wall in a 5-1 deficit.

Condon stepped up to the plate with two outs and homered to left field.

With the Leopards riding the momentum off of Condon’s home run, Schiff swung to send Sorensen’s pitch deep to right field.

The Leopards cut the Bruins lead to two runs, 5-3.

La Verne surrendered two more runs in the top of the seventh inning and entered the bottom of down 7-3.

The Leopards kept chipping away, and sophomore right fielder Sienna Kendricks opened the seventh inning with a bomb to left field.

La Verne then scored one more run, but it wasn’t enough, as they dropped the first game, 7-5.

“I’m a little disappointed in our circle, our offense was slow and kudos to their pitcher,” head coach Julie Smith said.

“They came out ready to play, but this team (Leopards) showed they’re not gonna give up and that they’re resilient.”

La Verne jumped to a 4-1 lead in the second inning and never looked back.

Schiff hit another homer in the fourth inning, and Borden drove in a run in the sixth inning. The Leopards took the second game, 6-1.

La Verne’s next game is a doubleheader against Antelope Valley at 1 p.m. and 3 p.m. Friday at Campus West.

“Team energy is a big part of the game, and we’re a bit younger,” sophomore second baseman Michelle Deguzman said.

“We lost a lot of girls because they graduated, but we’re looking to carry the level of success.”

Then the Leopards begin SCIAC play against the Occidental Tigers at noon Feb. 18 at Campus West.