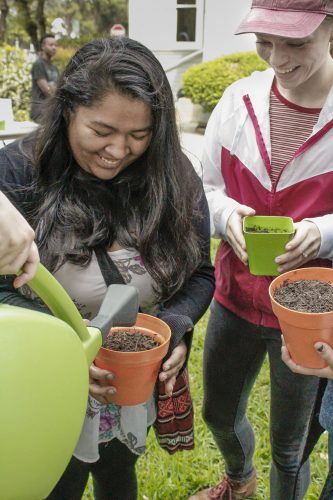 Freshman criminology major Maria Vargas and senior speech communications major Mikayla Thornley receive seeds to plant their own flowers during a showcase for the community garden behind the health center Tuesday, hosted by the Gardening Club. / photo by Tyler Deacy

As spring nears, the University of La Verne community garden has begun to show signs of new life, and members of the Botany and Gardening Club gave tours Tuesday evening.

The garden, located behind the health center on the corner of E Street and Third Street, has 10 plots growing various fruits, vegetables and flowers, a large grapefruit tree and three avocado trees.

“This is a common space, a place to get to know other members of the community,” freshman anthropology major K’lema Burelson said.

Members visit the plots once a week, whenever they are free, and help water, prune and collect fallen produce.

“We just want to bring people together,” Burelson said.

Every Sunday, Tianna Cano, freshman computer science major and president of the Botany and Gardening Club, walks some of their freshly grown produce to the Church of the Brethren on Bonita Avenue. Members of the Church of the Brethren then combine the fresh harvest with that of their own community garden and distribute the produce to local food banks.

“A lot of produce is delivered every week and for many people in the community this is their only source of fresh produce,” Cano said.

In summer 2012, the Church of the Brethren’s garden was responsible for donating over 1,000 pounds of food to local food banks.

The most popular produce include carrots, beets and sugarsnap peas, which are Cano’s favorite species to grow. During the event on Tuesday both Burelson and Cano explained their responsibilities to the crowd and gave a tour of the garden. Students then took part in a garden tool scavenger hunt as well as a planting activity where participants planted their very own flowers to take home.

Freshman political science major Kacee Jones, a new member, said she first became interested in working community gardens when she volunteered at the Ontario Community Gardens during her freshman orientation.

“Gardens like these offer a way for people to be self-reliant If they can’t afford it, they can grow it. It’s a sustainable way of living,” Jones said.

The garden will be open over the summer, where Cano will be caring for seasonal summer produce.

Cano said there are many plans for the club’s involvement on campus, such as providing fresh pumpkins for carving in the fall.

Members are encouraged to plant any produce of their choice in the empty pots, which will also be raised and donated to the Church of the Brethren when ripe.

“There are a lot of people going hungry, and it feels nice to know that I have a part in putting a stop to that,” Cano said.