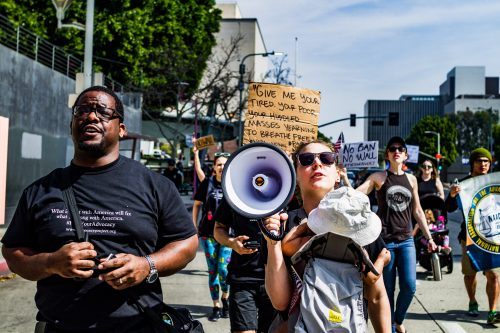 Thomas Allison and his wife, Brittany Allison, president and vice-president of the SJAP, march with the people who showed up to their organized protest. The Allisons seek to empower through inspirational dialogues and organizing.

Text and photography by Benjamin Camacho

A lawyer at his own firm, and a professor at the University of La Verne, Allison still has found the time to start the Social Justice Advocacy Project nonprofit organization, which he founded in 2015, with the goal of empowering the disenfranchised. 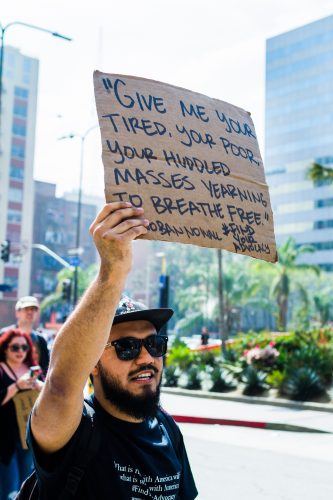 Geber Penate, junior criminology major, advocates for immigrants at the March Against Hateful Borders. His sign shows a quote borrowed from the Statue of Liberty.

The march – accompanied by a police escort that included Los Angeles Police Department officers on motorcycles, a patrol car, and officers on foot – began in Grand Park and ended on the steps of the Los Angeles Immigration Court.

In response to President Donald Trump’s controversial travel ban, and plans to build a multibillion dollar along the California-Mexico border, demonstrators’ signs read strong in references to immigration issues.

“No ban, no wall!” was a common statement.

Another sign, “Give me your tired, your poor, your huddled masses yearning to breathe free,” was carried by Geber Penate, a junior criminology major from the University of La Verne.

“The quote is an excerpt from a poem,” Penate said. “A description of the kinds of people that are expected to emigrate to the United States. Coming to the U.S. is usually an action of survival and Lady Liberty certainly has her arms open, as should we all.”

Penate is an SJAP member and an intern at Allison’s law firm.

The Project seeks to “help individuals that are generally counted out by society, to gain access to better social mobility,” Allison said. “The march helped signal to people who are facing discrimination that there are people willing to fight for them and stand up against injustices enacted upon them.” 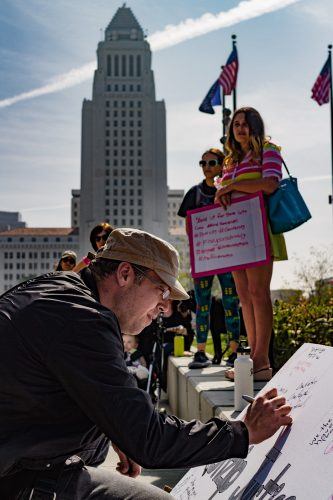 Kris E. of Los Angeles signs a board with a message in solidarity to those who have been oppressed by immigration practices. The board was carried throughout the march by demonstrators at the March Against Hateful Borders.

“(I) felt a sense of unity with everyone that was there,” Penate said. “Chanting at the top of my lungs gave me purpose in trying to give a voice to the voiceless.”

It is through these feelings and goals that advocates such as Allison and Penate seek to better society.

“A democratic system is functional when people take action to express similar beliefs,” Penate said. “People are required to come out and express their beliefs through voting or exercising their freedom of assembly to advocate for their beliefs.”

Allison said the SJAP will continue to advocate for social mobility, mainly through organizing dialogue.

Allison added: “The best way forward is educating people on the system that they must function in, while providing them the opportunities and resources to put their education and creativity to work.” 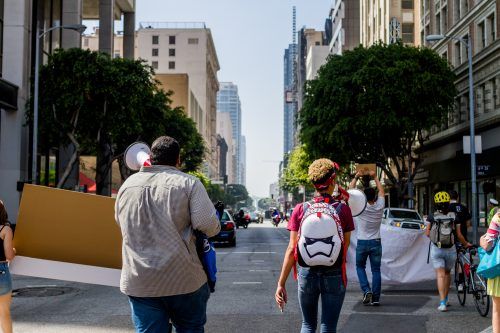 ULV alumni Tahil Sharma and Tyler Anderson chant together at the March Against Hateful Borders. The nonprofit organization, the Social Justice Advocacy Project, worked closely with the Los Angeles Police Department to organize the march and the police escorts for the event. SJAP coordinators even had radio communications with the officers during the march. 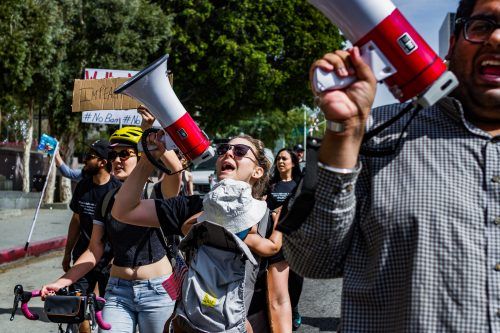 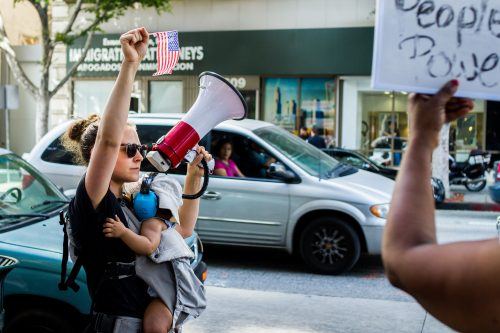 Vice President of the Social Justice Advocacy Project Brittany Allison voices her opinions on why it is important to work together for social justice. Her baby wears ear muffs for protection against the megaphone’s volume.