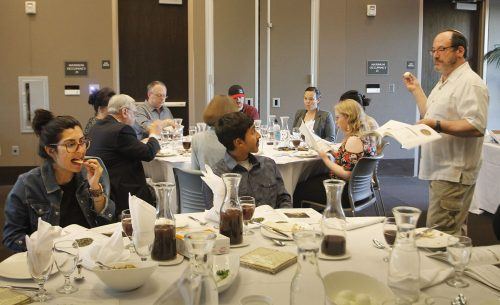 Paul Buch, cantor of Temple Beth Israel in Pomona, leads students, faculty and staff in a Model Seder April 5 in the Campus Center Ballroom. As part of the Passover tradition, Buch retold the deliverance of the Israelites from slavery in Ancient Egypt. / photo by Hannah Burton

“Seder” means “order” in Hebrew and refers to the set of rituals performed on an evening of Passover. Passover is an eight day celebration of the escape of the Israelite slaves from the land of Egypt. This year, it began Monday evening and ends Tuesday of next week.

Buch opened the Model Seder by teaching the attendees “Hinei Ma Tov,” a song with lyrics comprised of the first verse of Psalm 133.

The lyrics were “hinei ma tov umanayim shevet achim gam yachad.” Buch translated it roughly to mean “Behold, how good it is for people to sit together as one.”

Each attendee was given a Haggadah, a book with the prayers and explanations for what each ritual in the seder meant. The Haggadah says that the order of the rituals is as follows: Kadesh, Urchatz, Karpas, Yachatz, Magid, Rachtzah, Motzi Matzah, Maror, Korech, Shulchan Orech, Tzafun, Bareich, Hallel and Nirtzah.

The Model Seder was a modified version with some steps skipped and the other steps led primarily in English.

During Kadesh, the prayer over the wine is recited and the first glass of wine is poured. The Model Seder used grape juice in place of wine for the ritual.

In Karpas, the participants ate greens dipped in salt water.

During Magid, Buch and the audience retold the Passover story through various means. One example is the dipping of one’s finger into the glass of wine and making 10 drops on one’s plate, each drop representing the 10 plagues inflicted on the Egyptians every time the Pharaoh refused to free the enslaved Israelites.

After Motzi Matzah, Maror, and Korech, or eating matzah, bitter herbs, and a matzah-bitter herb sandwich, the attendees ate a meal that, in compliance with the dietary restrictions of Passover, contained no leavened products. After the meal came Bareich, which refers to the subsequent blessing over the meal.

Buch led the recitation of the English translation of Hallel and concluded the seder with discussion of Elijah the prophet and Passover-themed renditions of English songs printed on a sheet of paper.

He explained that at a typical seder, the door is left open, and one glass filled to the brim is left for Elijah the prophet.

The last song he led was “Pharaoh, Pharaoh,” performed on a guitar.

He said he comes from a Christian background, and that there are similarities between his faith and what he saw at the Model Seder.

“(The similarity) comes with the singing and the closeness of family and some of those things, especially the part where you’re mentioning your ancestors and the struggles they had to go through back in the times,” Gallegos said. “Usually, with some of our celebrations, with our Christmas, we do remember some of our past troubles from our ancestors.”

Angelica Flores, freshman anthropology major, attended the event because she wanted to write about it for her ethnography paper for her Myth, Magic, and Religion course.

She said she considers herself agnostic and, aside from the Holocaust, she did not know much about the Jewish community.

“I got a new understanding of the Jewish community and how they run things and what they believe in, so it was insight into something that I hadn’t really looked into before,” Flores said.

Buch said that the Model Seder is like the seder he runs at the temple. Although the seder at the temple is attended mostly by Jewish congregants, they bring non-Jewish guests, often spouses or family members.

“Most people don’t necessarily have a good facility in their own faith, much less Judaism,” Buch said. “When it comes to some of the things that we talk about in the seder, because it’s very oriented towards themes and personalities and ideas that are ancient in character, so I find that most people, most non-Jews, don’t have any factual knowledge about Judaism.”

Taxpayers shouldn’t foot this bill
Loud and Clear: United in the Streets: ‘Find your advocacy’ marches in solidarity against oppressive policy