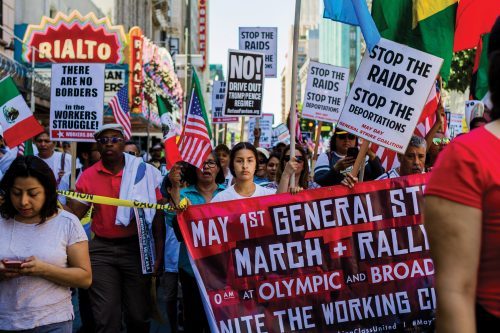 Mauricia Rialto holds the banner made by the organization that planned the rally. Working Class United had many representatives present at the rally, as well as different speakers from other organizations. Marchers flooded the streets as they closed in on Los Angeles City Hall.

text and photography by Benjamin Camacho

With flags held high, the smell of sage burning through the wind and the voices of over 15,000 fellow marchers, the May Day General Strike closed down Spring Street in downtown Los Angeles on May 1. The march, in support of worker’s and immigrant rights, began at 10 a.m. at the intersection of Olympic Boulevard and Main Street. Representatives from several immigrant rights groups, including the Coalition for Humane Immigrant Rights of Los Angeles, spoke against President Trump’s exclusionary immigration policies, as well as Los Angeles’ support for immigrants and undocumented students who have gone on to achieve higher education.

Flags of several Latin American countries flew in the air, with an even greater number of American flags brushing against them.

Marchers chanted the timeless “Si se puede” or, “Yes, we can,” a slogan that was coined by Dolores Huerta during the United Farm Workers strike in 1972.

Leading the march was a group of traditional Aztec dancers, complete with a drummer. They were the first to arrive at City Hall as the Los Angeles Police Department cleared the path for them to continue without any issues.

However, at City Hall awaited an obstacle unable to be silenced by police.

Barricaded by officers in riot masks was a counter-protest organized by Trump supporters. They were located on the same corner of the LAPD, adjacent to City Hall.

Some of the counter-protesters wore helmets and other kinds of protective gear, one wore a soldier’s camouflage.

A well-known Trump supporter, Kyle Chapman, also known as “Based Stickman,” was in the crowd. He became known during the March 4 Trump rally in Berkeley for hitting a National Anti-Fascist Organization, also known as Antifa, member over the head with a wooden pole after confrontations became violent.

Among the liberal crowd, one could spot certain people wearing only black clothes, bandanas, goggles or masks to hide their identity.

The group known as Antifa held its own black flags high. One Antifa member said the group was there to fight fascists if a fight broke out. He described themselves as anarchists and communists who are unafraid of conservative groups.

David Feiner, a Trump supporter and member of the San Fernando Valley 4 Trump group, said he was at the Berkeley March for Trump where things became violent due to marchers clashing with Antifa members.

“If this is ‘commie’ day, or Antifa day, anything they are here to celebrate, we are here to ruin that,” Feiner said. “Antifa is deadly. I was in all the fights, on the front-lines. Today has been scary, we have had water bottles thrown at us.”

LAPD Officers maintained the perimeters with vigilance and presence. Only a few outbursts or confrontations occurred. No injuries were reported. 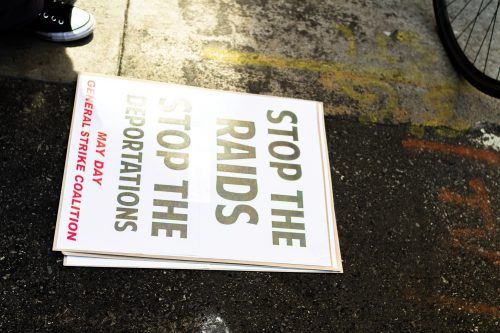 This style of sign, one of many that was handed out before the march began, was mass produced by the organizers of the protest. Upon arriving to the initial meeting point, organizers offered signs and flags to those who were empty-handed. Signs were also left on the ground for whoever wanted to pick them up to march with. 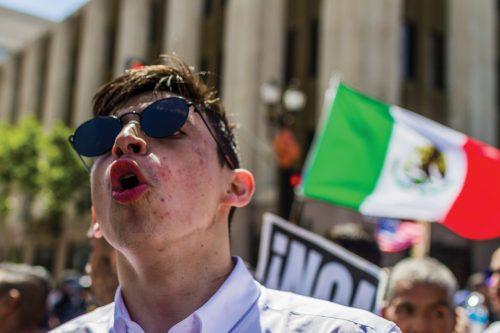 Josue Landin, a resident of Santa Ana, adds to the voices which made up the march. Being an undocumented worker, he has faced struggles that many have not known. He and other marchers were in front of the counter-protest. 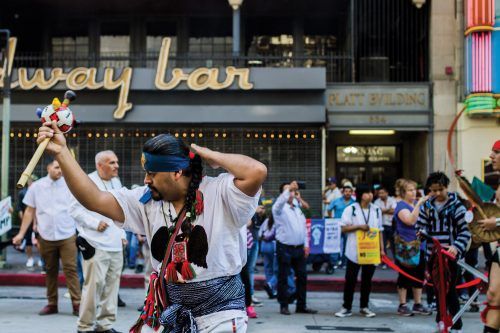 One of the main Aztec dancers moves forward with feet sliding across the street. He holds a ceremonial staff and also burned sage during the start of the dance. The children who also danced followed his lead. Fellow marchers made an effort to keep all of the dancers hydrated by buying water from vendors who followed the march from start to finish. Vendors also sold hot dogs and soda. 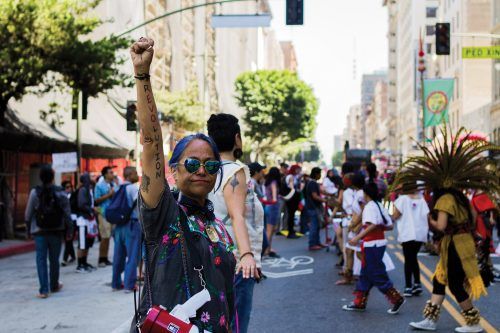 Maria Sheldon, a demonstrator from the May Day General Strike, begins her march with a megaphone, giving directions and chants for the crowd behind her. A tattoo on her arm reads “REVOLUTION.” This was the forefront of the march through downtown Los Angeles. 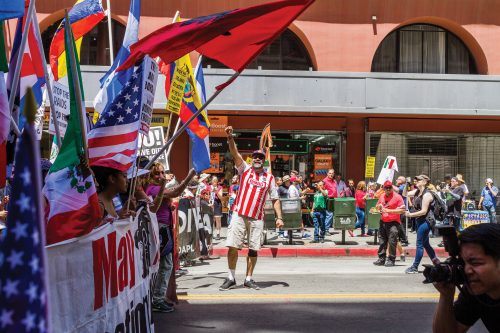 The start of the May Day General Strike began with immense energy from the people. Herardo Gomez raises his fist in effort to further rally up the marchers. An indigenous people’s flag waves forward with the deep red color. 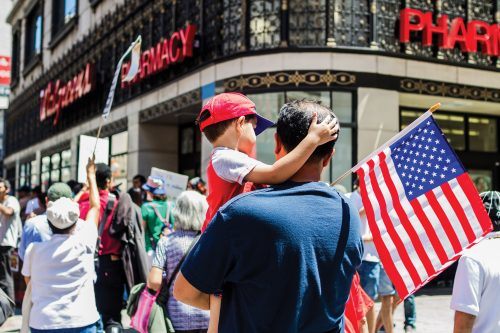 A man carries his son through the entirety of the march through the streets of Los Angeles. His son holds a water bottle for the both of them. 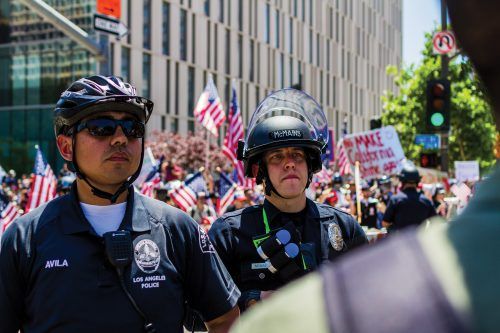 Los Angeles police officers Avila and McMains peer into the crowd, observing for any splurges of energy by potential aggressors. Trash and potentially harmful objects such as full water bottles or paint-filled condoms were thrown over the police line into the other crowd. Trump supporters would throw objects back or deflect them with shields brought from home. 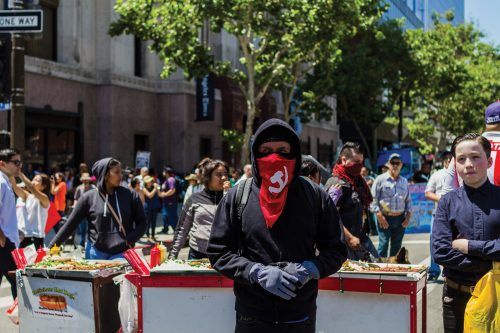 A member of Antifa secures his gloves in preparation for what the Antifa group expected: a rumble. Antifa members wished to remain anonymous and refused to give out any names. This man arrived with several other members of Antifa; one of them carried a flag, most of them had backpacks that appeared to be full, others carried blunt objects. This man shows his beliefs on his face with a hammer and sickle bandanna, the symbol for communism. Behind him was a street vendor selling the well-known “LA dogs” which are hot dogs wrapped in bacon and grilled onions. 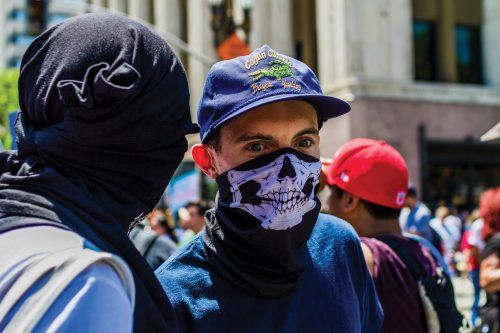 Two Antifa members speak to each other about what the plan for the rest of the “standoff” is. The “standoff” was an all-day confrontation with Trump supporters, who arrived at 9 a.m. Antifa members met them at this time, and LAPD officers quickly rushed to prevent any fights or injuries. By the time the General Strike marchers arrived, Antifa members had blended into the crowd and maintained a low profile. 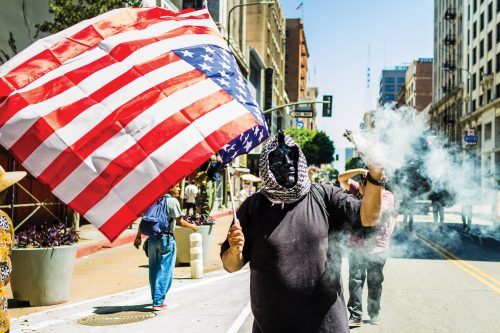 An Antifa member marches with the liberal group during the General Strike. He burns sage and holds the American flag upside down in effort to show opposition for what Antifa considers a “fascist regime.” This idea is prominently communicated by anti-fascist groups at most rallies. The burning of sage is a tradition originating from Native American cultures, it is believed that burning sage, or “smudging,” blesses or protects a person. 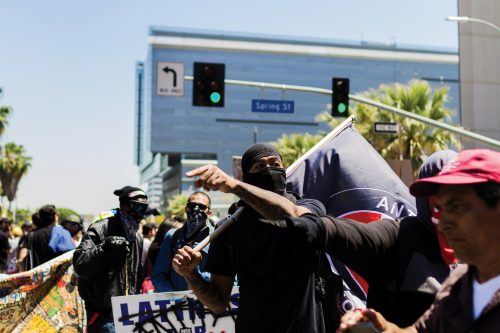 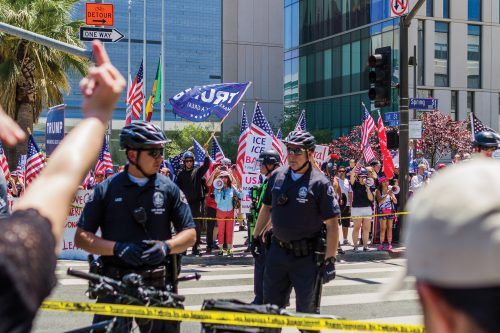 The scattered police line and two barriers separating the two sides that faced off for the rest of the afternoon until 5 p.m. Hate speech and hateful gestures were exchanged between the sides. Few people dared to cross the police line, only to be escorted away from the area and asked to either return to their side or stay away from the intersection.