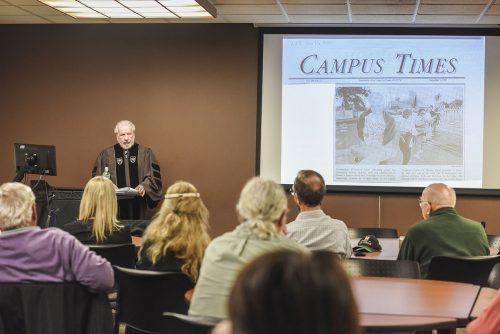 Professor of English William Cook reflects on 30 years as a classroom teacher at the University, with many years as an administrator during his last lecture before retirement. The stories he told included the transfer of archives and books from the Wilson Library’s temporary location to the Barkley Building. Cook refers to the group as the “Book Brigade,” a line of University of La Verne employees and students who teamed up to pass the archives and books along down the street. / photo by Alexandra Arkley

Before an audience of roughly 40 faculty, staff and students William Cook, professor of English, talked about the importance of being true to oneself.

Cook titled his last lecture before retirement “The Lion in Winter.”

It was held Tuesday in the President’s Dining Room.

“If you have a feeling or thought about change don’t be afraid and stand up for it,” Cook said.

Cook told the audience that education should be anything but restrictive.

“Our minds should be able to explore so that all views can be integrated for a new kind of revolution,” Cook said.

Cook also reflected on his 30 years at the University as an administrator and tenured professor, and he showed a clip of a lion with hysterical laughter in order to lighten the mood he set previously.

“The purpose of education is the furtherance of truth, not for controlled propaganda that advertises a Disney-like happiness,” Cook said.

His talk also touched on civil rights and activism such as the Black Lives Matter movement.

“These people are obeying a law greater than what Congress enforces,” Cook said.

Cook reminded his audience to always stay true to their beliefs regardless of what the majority believes or deems as right.

He said it is necessary to speak without putting others down. Power comes from the support of others, not the belittling of others.

He encouraged the new generation to bring politicians “to their knees,” to call them out on things they may not agree with.

“The same issues are going to happen again, that’s why we need a new revolution to counter it,” Cook said.

The lecture ended with a standing ovation from the audience.

“He wants you to understand that you … have the opportunity to make a change toward your future and not just to listen to what government and rules place on you,” Jimenez said.

Senior kinesiology major Tiahna Gillon added, “He’s given so much to the University and his students so this was his last impression and legacy for the end of the year.”

Deborah Lee can be reached at deborah.lee@laverne.edu.

One Response to Cook hopes for political revolution