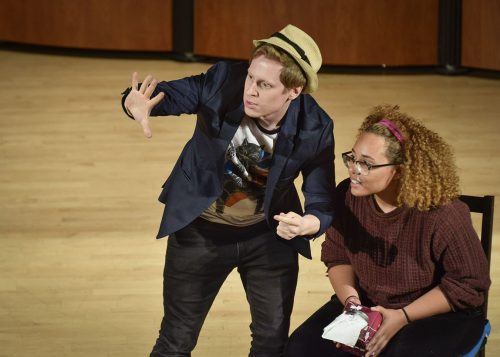 Ben Seidman, a magician and comedian, performs for students Tuesday in Morgan Auditorium. Kiana Maria Gonzalez, freshman political science major, volunteered to be part of the show for a trick in which Seidman made the tissues from the box she was holding disappear. Seidman’s shows are known for a combining sleight-of-hand tricks, pickpocketing and comedy. Seidman performs regularly at the Magic Castle in Hollywood and also tours the country performing at colleges, parties and special events. / photo by Sara Flores