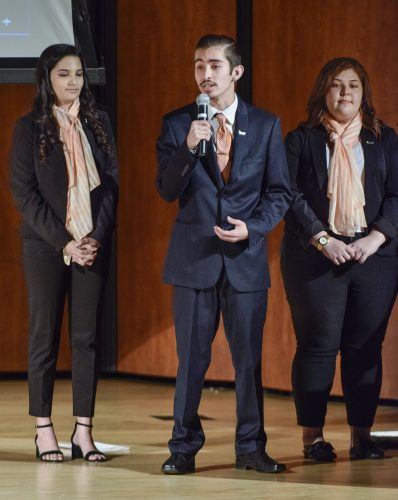 Senior business administration major Jose Perez gives the Enactus team’s presentation Tuesday in Morgan Auditorium with junior business administration majors Alyssa Noriega and Seham Musleh. The team, which won in the San Bruno Regional Competition, will head to national competition in Kansas City, Missouri, this weekend in hopes of qualifying for the Enactus World Cup. The team presented on the work they have done in Pomona and abroad. / photo by Sara Flores

The University of La Verne’s Enactus team gave students, faculty, and their family members a preview of their team presentation Wednesday in Morgan Auditorium before they compete in the Enactus National Exposition in Kansas City, Missouri.

Enactus gave their presentation in celebration of their victory in the San Bruno Regional Exposition April 13, which qualified them for the national exposition.

“The competition will be very tough and fierce, as all of the regional winners will be there,” Issam Ghazzawi, professor of management and Enactus adviser said.

“There will be no mediocre teams. All of them will be well prepared presentation wise, project wise, and they will be judged by a group of corporate judges from top companies.”

Melanie Browdy, Enactus president and senior business administration major, gave an introductory speech describing Enactus and congratulating the La Verne team for their victory in the regional competition. She said that “Enactus” stood for “entrepreneur, action, us.”

“The mission of Enactus is to engage in the next generation of entrepreneurial leaders and to use innovation and business principles to improve the world,” Browdy said. “Here at the University, we have done that and much more in the last 12 years.”

Three projects focused their efforts within the community of Pomona.

The first project, building a community garden at Alcott Elementary school in Pomona, was part of Enactus’ mission to help address the problem of childhood obesity. Children of poorer backgrounds were twice as likely to be obese than children of wealthier backgrounds, Musleh said. Enactus also presented workshops about nutrition and exercise to more than 450 students.

“The typical student receives just 3.4 hours of nutritional education each year and studies have shown that by implementing garden programs, we can help them lead a better lifestyle,” Nosrati said.

Enactus’ second project was their Skills for Success program, which targeted Village Academy High School of Pomona and the School of Extended Educational Options. The program was developed to tackle the issue of homelessness among students in the Pomona Unified School District.

The program, which assisted 45 students, included workshops devoted to education and resume writing as well as a clothing drive on the University’s campus. The 3,000 items of clothing donated to the 45 students were intended to be worn on job interviews.

Crudupt served as a photographer during the project and interacted with the students who benefited from the clothing drive.

“They easily picked up about five to 10 things to take home they tried on,” Crudupt said.

“I felt that a lot of students hadn’t had the opportunity, because I could tell on a lot of their faces that they were looking at it like ‘oh, what is this, I’m not used to wearing this.’ At first, I could see them joking and laughing amongst each other. Once we were able to tell them ‘oh, this looks good on you’ or ‘oh, this looks perfect for an interview in a professional setting’ they were very understanding, and they ventured out and found stuff that they liked.”

The Enactus team invited managers from a local McDonald’s to teach students how to perform well in interviews. During those sessions, 28 students were offered part time jobs.

The Enactus team also collaborated with the University’s Office of Financial Aid to give the students information regarding the Free Application for Federal Student Aid and federal work study.

Enactus also furthered the development of REACH, a 12-year-old University program meant to help first generation students with the college application process with a focus on business.

At the end of the summer session of REACH, student groups presented business plans that were evaluated by a panel of judges. Members of the top four teams were given the chance to work at various McDonald’s restaurants.

Enactus helped Salvador, a street vendor in Mexico who sold tamales in Puerto Nuevo, by purchasing a bicycle cart and other equipment to increase his mobility and income.

Salvador, whose surname was not given, took care of a family of 12.

The Enactus team used their own resources and fundraised for the purchasing of Salvador’s equipment.

“Nora [H. Navarrete-Dominguez], our district director, mentors a man down in Mexico, and he helped us locate Salvador,” Chani said.

“He told us that he was in need of help because he had such a large family and no means to create a better living for himself, so we went to the town that they have a vacation home in and collaborated with them to help Salvador and his family.”

Enactus also sought to tackle a water crisis in Cambodia. A 2014 UNICEF annual report estimated that 6.3 million Cambodians do not have access to clean water.

Enactus partnered with Solar Water Solutions to make 53 portable water purifiers in Solutions’ facility in San Diego. These purifiers, called Aqua Pacs, were shipped to Cambodia and distributed by the mission of the Elders of the Church of Jesus Christ and Latter Day Saints.

The Enactus team will compete in the National Exposition in Kansas City from May 20 to May 22.