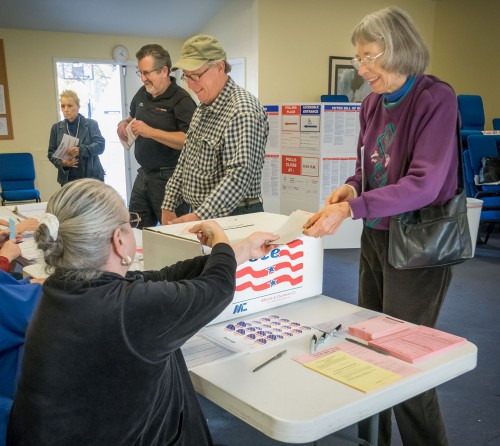 Mary Castillo, a volunteer at Lighthouse Baptist Church, helps residents finish casting their ballots for the city of La Verne General Municipal Election on Tuesday. After voters put their ballots into the designated drop box Castillo gave them a receipt and an official “I Voted” sticker. / photo by Sara Flores

Rosales is a retired police officer who has served as a council member and planning commissioner for the past 12 years.

Hepburn was an electrical contractor for 23 years and has experience serving the community of La Verne, including being a member of a Parent Teachers Association.

Lyons acknowledged the strong pool of candidates running for city council before the election.

“I don’t think the city of La Verne can go wrong with any of the four candidates,” Lyons said.

Ron Ingles, who was elected to the city council in 2013 following the death of Robert Rodriguez, chose not to run due to a heavy workload as chief law-enforcement liaison for the Los Angeles County District Attorney’s Office.

Of the 20,519 registered voters in La Verne, less than half turned out to the polls.

This might not have been a national election, but as poll worker Joe Jimenez said, that should not matter.

“It’s a part of the cogs and wheels that keep government going,” Jimenez said.

Jimenez said that getting the voting age to 18 is a right that previous generation, such as his, fought for and that it should not be taken for granted.

Voter Christina Dehler is a professor of education at Cal Poly Pomona and has been a resident of La Verne for 14 years.

She said that the growing diversity of the community should be enough to get people to come out and vote.

“It’s important that everyone who lives here is represented,” Dehler said.

Hepburn said in his campaign statement that one of his main goals was to create more political transparency for the citizens of La Verne, which will hopefully lead to more political involvement.

Even with some new faces being injected into the city council, Lyons said that there is still plenty of work to be done.

“What I’ve found as a candidate these last few months is that not everyone is at the table having these conversations and we’re not developing the best possible solutions,” Lyons said.

The official results from the election will be presented at the next La Verne City Council meeting on March 16.